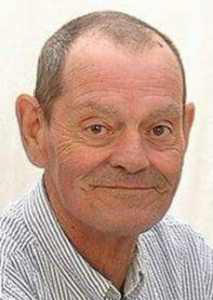 James Michael “Mike” Davis was born November 30, 1949 to Samuel and Annie Davis in Baskerville, Virginia. He is survived by his two sons, Samuel G. Davis and his wife Christy of Buckingham, and Christopher M. Davis and his wife Kathryn of Arvonia; eight grandchildren, Seth, Clayton, Amearah, Hannah, Skylar and Tanner Davis of Buckingham and Stephen and Elly Davis of Arvonia; one sister Janice D. Crutchfield of Chase City. He is preceded in death by his wife, Martha M. Davis; two sisters, Carolyn Davis of Chase City and Dr. Anne Davis of Waco, TX.

Mike was formally employed as a police officer by the town of Manassas, Mecklenburg County Sheriff’s Office, and Buckingham County Sheriff’s Office before working and retiring from LeSueur Richmond Slate Corporation as General Superintendent. Mike was well respected in the community and formally represented the Marshall district on the Buckingham County Board of Supervisors. He was an avid Outdoorsman and Houndsman who raised and trained several championship dogs. He spent his later years enjoying his time as a father and grandfather.

A memorial service will be held at 11:30 at Bethlehem Baptist Church, 393 Winfrey Inez Road, Dillwyn, Virginia (intersection of S. Constitution Route and Troublesome Creek Road) Saturday, September 8. The family will receive friends from 10-11 a.m. at the church. In lieu of flowers, contributions can be made in memory of Mike to the VA Hunting Dog Alliance, PO Box 657, Powhatan, VA 23139.

Ernest William “Willie” Orange, 81 of Prospect, VA passed away peacefully on August 29, 2018. He was born on April... read more