Ivan Price Davis Sr. passed away peacefully with his family on September 21, 2018 at the age of 98. Born on September 16, 1920 in Dillwyn he was the youngest son of Thomas Jefferson Davis and Gertrude Price Davis. He is preceded in death by his wife of 58 years, Mollie Pearson Davis and his son Reid Pearson Davis. He is also preceded in death by his brothers and sisters. 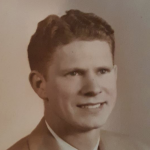 He is survived by his daughter Mary Winston Wise, her husband Harry Edward Wise and their sons Thomas Wise and Jefferson Davis Wise.

Ivan served in the Army Air Corps during WWII and later graduated from the College of William and Mary. He was a long term employee of Sperry-Rand in Charlottesville and was best known as co-owner and operator of Dillwyn Supermarket. He was also the owner of Whetstone Farm.

Funeral services were held at First Baptist Church on September 24, with interment at the Davis Family Cemetery on Whetstone Farm.

Memorial contributions can be made to the Dillwyn Volunteer Fire Department or First Baptist Church of Dillwyn.