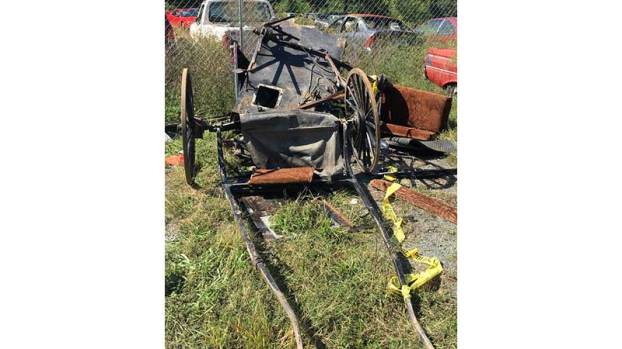 Pictured is a buggy following a vehicle accident Sunday where four were transported to the hospital, three with serious injuries. (Photo by Nick Conigliaro / WRIC 8News)

Virginia State Police (VSP) confirmed that four people were transported to the hospital, three with serious injuries following an accident Sunday morning that involved a vehicle and a horse-drawn buggy.

“A 2002 Honda was traveling north on Route 15 when it rear-ended a horse-drawn buggy,” Geller said. “The impact of the crash destroyed the buggy and caused the Honda to overturn.”

The driver of the Honda vehicle, Haley Taylor, 18, was transported to a nearby hospital for treatment of minor injuries. She was charged with reckless driving.

The horse did not survive the crash.

As of Monday afternoon, there was no word from police on the current condition of the three who had severe injuries from the accident.

Virginia State Police released an advisory Monday due to recent accidents involving buggies in the area on Sunday, and an accident in July where an Amish buggy was rear-ended by a Chevrolet Impala on Route 20 near Route 631. The buggy’s two passengers, a mother and her 8-year-old son, suffered minor injuries.

“With the increase in Amish families moving into Buckingham County, there is a greater need for buggies and motor vehicles to safely and responsibly share the road together,” said 1st Sgt. E.K. King, Virginia State Police Area 19 Commander in the advisory. “An Amish buggy is to be treated like any other vehicle traveling on the road and should only be passed when it is safe and legal.”

Amish buggies are legal on Virginia highways and are more commonly found in Charlotte and Halifax counties, as well as up near Harrisonburg where there are large Mennonite communities.

According to the Ohio Department of Transportation (ODOT), Amish buggies travel at speeds of around 5 to 8 miles per hour. The advisory cited that more than 65 percent of all traffic deaths involving buggy drivers and passengers occur in rural areas.

“ODOT also reminds motorists ‘that horses can be unpredictable and even the most road-safe horse can spook at a fast-moving vehicle.’”

“The horse-drawn buggy, which is solid black, is especially difficult to see at night,” the release cited. “According to the Virginia Driver’s Manual, a horse-drawn vehicle must display on the back of it a ‘Slow Moving Vehicle’ triangular placard when in use on public highways. When approaching a buggy, the DMV manual advises a motor-vehicle driver to ‘be prepared to adjust your speed or position when you see a vehicle with one of these signs.’”