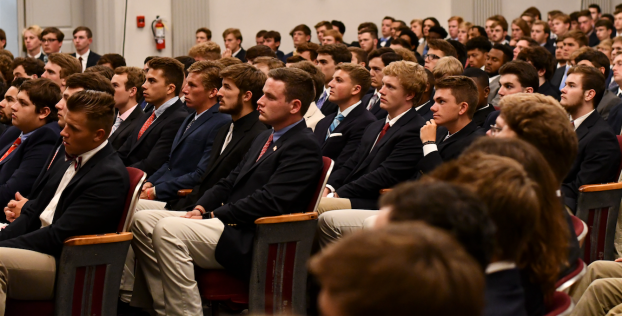 Hampden-Sydney College (H-SC) recently welcomed an entering class that, due to its remarkable size, has earned a special place in the school’s history.

“You are SOME class,” H-SC Dean of Admissions Anita H. Garland told the college’s newest freshmen and transfer students Aug. 23 as they assembled with their families on Venable lawn, according to a school press release.

Officials stated that Hampden-Sydney’s Class of 2022 is one of the largest in school history, noting it totals 342 young men from 20 states, with members holding citizenship in the countries of Belize, Canada, France, Germany, Ireland, Kazakhstan, Mexico, and, of course, the U.S. The new Tigers began going to class Aug. 27, and the next day, they were in attendance at Opening Convocation.

“Here and in the larger society, no honest work is without dignity or unworthy of respect; no one is undeserving of your acknowledgment,” Thomas H. Shomo said to the H-SC community Aug. 28, as was highlighted in another press release. Officials said his quote above — a reference to the “longstanding tradition on our campus that we speak to each other as we pass” — is one of many gems from Shomo’s featured address at Opening Convocation for the 2018-19 academic year.

A release noted that in remarks titled, “One Who Never Inflicts Pain,” Shomo addressed the concept of a gentleman, a timely topic not only because of the large number of new young men joining the H-SC brotherhood but also because it is the 40th anniversary of Shomo’s well-known book, “To Manner Born, To Manners Bred: A Hip-Pocket Guide to Etiquette for the Hampden-Sydney Man.”

A key element of Hampden-Sydney’s distinctive identity is its historic mission “to form good men and good citizens,” an ideal that Shomo explored in detail, a release cited. It also stated that Shomo’s remarks blended history with a discussion of gentlemanly ideals and behavior, as well as the way these ideals and behaviors contribute to the fabric of Hampden-Sydney and form its place in society.

“Drawing inspiration from the founders, civility and civil discourse is valued at Hampden- Sydney,” Shomo was quoted as saying in a release. “It was through civil discourse — often expressed in the clear and compelling writing that is the goal of the Rhetoric Program — that support was gained to launch and sustain a difficult war of independence and to create a unique nation of laws and not of kings.”

Shomo was a member of the H-SC Class of 1969 and served for many years as the college’s director of public relations, officials stated in a release. They continued by noting that he also highlighted in his address the college’s Latin motto, which translates to “come here as youths so that you may leave as men.”

With characteristic humor, he reminded students that success is not a certainty: “Please note the phrase ‘so that you may leave as men.’ It is a possibility. Your experience at Hampden- Sydney will transform you, but it is not a magical process accomplished without your effort. Even Harry Potter had to go to class.”

A release related that Shomo closed with a piece of guidance for the newest and especially large-in-number generation of Hampden-Sydney students: “Above all, never be one who causes pain. No, no. Do not just be one who never causes pain. Be one who gives joy.”