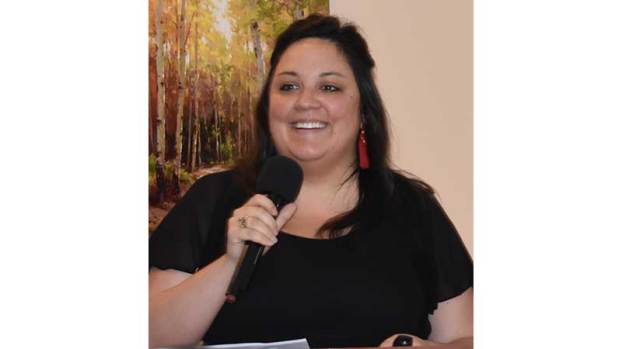 Kate Eggleston, economic development director and public information officer with Prince Edward County, spoke about community development and growth in the Heart of Virginia during a luncheon meeting with the Farmville Area Chamber of Commerce Sept. 10.

Eggleston, during the meeting, likened economic development — a healthy growth of a community through bringing in new industry and strengthening existing industries — to an orchestra. All of the instruments and all of the components need to be present in order to thrive. Have a piece missing, and the orchestra or the community does not work to its full potential.

“It’s not a job that you can do on your own,” Eggleston said. “It involves the whole community. It involves people like you who are business owners, who are leaders and are active in their community,” Eggleston said. “It involves the schools and other local governments. We work hand in hand with the Town of Farmville very often to bring business and economic development to the county. If one piece is missing, it affects the overall growth and sustainability of the community as a whole. … We can come together to provide the skills, resources and ideas.”

She said it takes the support from a lot of stakeholders, in addition to state and federal resources, to bring new industries to the area.

“Collaboration is key,” Eggleston said. “My job is all about collaboration and helps to ensure that all of the stakeholders are aware of changing needs, relevant laws and policies, and availability of resources, and the community goals and projects that are currently at hand.”

She said another important aspect of working in economic development is collaborating with area organizations such as Farmville Downtown Partnership, Longwood Small Business Development Center and the Farmville Area Chamber of Commerce, of which Eggleston is a board member.

She said the easiest part of her job is bragging about Prince Edward County and the Town of Farmville.

She said the area has a number of assets, including being at the crossroads of two highways, U.S. Route 460 and U.S. Route 15; five Virginia State Parks, its close proximity to Hampden-Sydney College, Longwood University and Southside Virginia Community College, and its rich history of Civil Rights and the Civil War.

“Having that plan will help us to guide our work moving forward and also to have accountability for the things that we want to accomplish,” Eggleston said.

She said while people often associate economic development with bringing in new businesses, a main priority is also retaining and growing existing businesses as well.

“I was so impressed by the amount of special knowledge and work that goes into those two things,” Eggleston said. “They’re vital businesses in our community.”

She said she and the county are looking at how the companies could expand, which could create jobs, build bigger facilities and allow the companies to get new machinery that could help them run their industries more efficiently.

She said new businesses come into localities in one of several ways, which include independently, when a business contacts a locality directly. Eggleston said this is rare. She said in the event that this does happen to localities, the first thing prospective businesses often look at is on the web, on the county’s website.

She said the Prince Edward County website needs improvement, but said the Board of Supervisors allocated some money in its Fiscal Year 2019 budget to strengthen the website.

She also said state and regional economic development networks are a way that new businesses can come to the area. She said creating connections through agencies like the Virginia Economic Development Partnership is the most common way businesses come to localities.

If state agencies can attach faces and relationships to a particular locality such as Prince Edward, those representatives are most likely to recommend prospective businesses to the county.

Those grants are typically awarded to the locality, which are then passed on to the business owner.

There are also enterprise zone grants.

Eggleston said this program runs through the Virginia Department of Housing and Community Development.

The zones are formed through a partnership between state and local government that encourages job creation and private investment in the region where the enterprise zone is located.

Eggleston said the enterprise zone in Prince Edward goes through the middle of the Town of Farmville and stretches out on Third Street both ways. There are also zoning areas in Prospect, Rice, Meherrin, Virso and Keysville.

Due to legislation at the state level that narrowed the number of zones from 45 to 30, Eggleston said Prince Edward County will be losing its Enterprise Zone designation next year.

She said she is coordinating efforts to meet with state officials about the loss of the Enterprise Zone designation, and encouraged area business owners to participate.

Eggleston took questions from the audience after the presentation.

Chamber member Audrey Sullivan asked if next year is the only year business owners could apply for the Enterprise Zone grant.

Eggleston said business owners in the area have one chance to apply for the Enterprise Zone grants in the spring of 2019.

An audience member asked if the grants could be used to purchase an already-existing structure.

Eggleston said only if they are expanding onto that structure.

Another audience member asked if there is a certain amount of money people have to spend.

Eggleston said the amount needed to spend is different in order to qualify for each grant.

Qualified real property investments include expenditures associated with any exterior, interior, structural, mechanical or electrical improvements necessary to construct, expand or rehabilitate a building for commercial, industrial or mixed use, Eggleston said Monday.