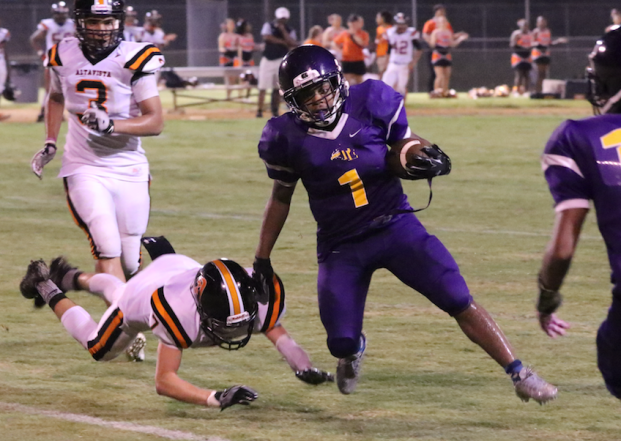 Prince Edward County High School senior wing back Jarrel Robinson evades an Altavista High School defender Friday night while running for a 10-yard touchdown. He contributed a touchdown on a run, a reception and an interception return to help the Eagles defeat the visiting Colonels 39-14. (Photo by Titus Mohler)

Eagles fly back to fundamentals in win

The key ingredients in the victory were both basic and essential.

Senior Jarrel Robinson, who had an outstanding night on both sides of the ball, put Prince Edward on the scoreboard early with an 80-yard interception return for a touchdown.

Later in the first quarter, Eagles junior Abdul Johnson’s 32-yard interception return set up senior J’Sean Dupuy’s 21-yard touchdown run. Dupuy helped give his team a 20-0 lead with two minutes, 38 seconds left in the period when he also ran for a 12-yard score.

“Our o-line did a tremendous job blocking tonight,” Ford said. “Give a shoutout to all of those guys, starting with our sophomore center, Omarion Allen, (then) James Morgan, Kaleb Hensley, Sa’Vyon Battle and Chris Campbell. … They worked all week just to get better … and just to understand what we’re trying to accomplish and understand what we’re trying to do, and those guys, kudos to them.”

Morgan and Campbell are seniors, Battle and Hensley are juniors and Allen filled in for injured senior center Jarmal Joyner for the second straight game.

“And then our running backs just ran the ball hard,” Ford said. “They made it real simple for (freshman quarterback) Nate (Reed). Nate was able to get out and complete some easy passes because we were able to suck (the Colonels) in the box.”

Altavista put some points on the board with its passing game during the final minute of the first quarter with a 20-yard scoring toss, but then Prince Edward responded in the second quarter with a passing attack of its own.

Less than a minute and a half in, Reed connected with Robinson on a screen pass that turned into an 18-yard touchdown to make the score 26-7.

Prince Edward senior Rahme Marshall helped push his team’s lead to 32-7 with a 10-yard scoring run with 6:10 left on the clock.

The Colonels did not quit, though, and came within striking distance of scoring near the end of the first half, but Reed showed his ability on defense as well, hauling in an Altavista pass in the end zone for an interception.

Neither team scored in the third quarter until the 1:02 mark when the Colonels found the end zone on a 15-yard run.

At times, Altavista still seemed like a team that might put together some touchdowns and make the game close, but penalties and Prince Edward’s defense helped stall those efforts.

The second half was somewhat extended, marked by multiple minor injury timeouts as trainers helped players stretch on the field.

Late in the fourth quarter, Eagles sophomore defensive back Saybien Peterson intercepted the Colonels and returned the ball deep into their territory.

“He put in a whole lot of work this summer to do what he does, and it paid off,” Ford said of Peterson. “He’s one of our good football players, and (I’m) proud of him.”

The Eagles offense helped seal the game with 1:57 remaining when Robinson ran for a 10-yard touchdown.

Ford highlighted his assistant coaches, Matthew Mace and James Baker, for quite effectively pushing and preparing Prince Edward’s offensive linemen for the game.

The line helped the team gain 212 yards and four touchdowns on the ground. Dupuy led the way with 11 carries for 111 yards and two scores, and Marshall added 10 carries for 73 yards and a score.

Reed went 4-for-9 passing for 48 yards and a touchdown.

On defense, junior T.J. Williams led Prince Edward with 12 total tackles. Seven of them were solo, and three of them were tackles for a loss. He also had two sacks. Marshall tallied 11 total tackles, including eight solo, two for a loss, and he had one sack.

The 25-point win was a big turnaround from the 72-6 loss to host William Campbell High School the Eagles suffered in their season opener Aug. 24, and they did it while still missing five key starters.

“Aaron Carter tried to give it a go in the first half, but he just couldn’t hold up,” Ford said. “He, unfortunately, had to be taken off the field.”

But Prince Edward (1-1) showed it could adapt to some of these personnel losses, experiencing success while giving Carter and the others some time to recover.

“We enjoy this for a day, and now we’re on to Cumberland,” Ford said.

Friday at 7 p.m., the Eagles visit Cumberland County High School (0-1), which had a bye last week.