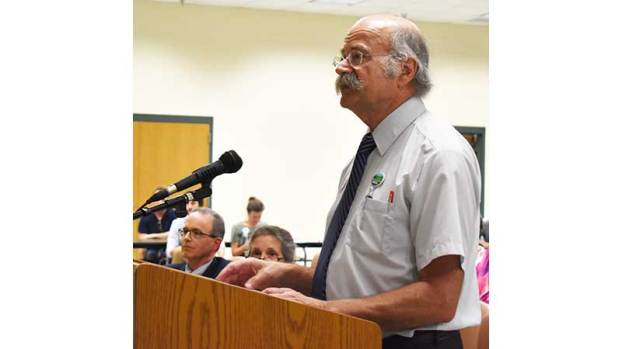 Lou Zeller, executive director of the Blue Ridge Environmental Defense League, finishes his public comment about the draft air permit for the compressor station with a song during a public hearing Tuesday. (Photo by Emily Hollingsworth)

More than 80 members of the public voiced concern or support of the proposed draft air quality permit submitted to the Virginia Department of Environmental Quality (DEQ) by the Atlantic Coast Pipeline (ACP), LLC for the 57,783-horsepower compressor station in Buckingham County for the ACP on Tuesday at Buckingham County Middle School.

The air quality permit and engineering analysis from the Virginia Department of Environmental Quality (VDEQ) State Air Pollution Control Board in reference to the Atlantic Coast Pipeline (ACP) compressor station, proposed to be located off Route 56 in Buckingham.

The air permit for the compressor station is considered a minor New Source Review (NSR) air permit, a title designated for facilities where uncontrolled emissions of equipment and process units are above exemption levels detailed by the VDEQ.

The permit included 51 requirements for the compressor station, including that the operations practice proper emission controls, that equipment be installed with the proper monitoring devices, that the appropriate fuel be used and regulated, that the emissions fall within the necessary limits and be properly tested and evaluated.

Prior to the hearing, DEQ representatives and organizations in opposition to the ACP, including Friends of Buckingham and Concern for the New Generation, gathered in front of school. Organizations opposed to the compressor station and pipeline led a prayer, provided food and beverages and made signs and flags protesting the pipeline.

He said the public comment period, that started Aug. 8 and was initially scheduled to end Tuesday at midnight, was extended 10 days to Sept. 21.

“No decisions will be made here,” Langford said. The board is scheduled to meet Nov. 8 and 9 and is expected to be held in the Richmond area. “Please be assured that the board will consider all relative information you present regarding the draft air permit.”

Addressing concerns that the print copy of the draft air permit was not available at the Buckingham Branch Library until Aug. 24. Corbett said after the meeting that the DEQ does not have a time period to have a hard copy of the permit available. He said a hard copy is available at the regional office located in Glen Allen, and said the DEQ placed the hard copy in the library after concerns about the lack of internet access in large portions of Buckingham County.

Participants had three minutes to give comments, and gave additional written comments to DEQ representatives. Audience members were asked not to applaud following statements.

Proponents of the permit cited feeling assured by stringent requirements in the permit; the steps taken by Dominion to mitigate environmental repercussions and the amount of resources and benefits that would come from the ACP.

Those in opposition to the permit cited gaps for monitoring the compressor station; the potential long-term health effects the compressor station could have on residents who live closest to the station; the concern of injustice that the station would be placed in a historically African-American community developed by freed slaves, and most disproportionately affect the majority African-American elderly and youth, the environmental effects, noting Hurricane Florence and the potential for greater greenhouse emission, the effect of pollutants on residents who live by the station and lack of a defined emergency management plan in the county.

Ruby Laury, who lives in Union Hill, cited studies that show that industrial projects similar to the ACP are often placed within low-income communities and communities of color. She said the project could affect the community’s livestock and domestic animals. Ruby said members of the community, not Dominion, should determine what is best for them.

“We do matter,” Laury said. “You people have looked over us as if we don’t exist. We need to be men and women and stand up for what is right, even if you have to stand alone.”

John Laury asked who would be monitoring the station’s pollution levels, or who will repair equipment that would fail. He asked whether community members would be alerted to evacuate during an emergency or if there is a leak. He asked about the long-term health effects the compressor station could have.

John Arsenault, who owns Arsenault Company, LLC in Prince Edward, spoke in support of the ACP and said he previously worked on a pipeline exploration project in Alaska. He said the ACP air pollutant restrictions are more stringent than in neighboring states.

He said natural gas “can provide a secure energy future for all of Virginia.”

Lou Zeller, executive director of the Blue Ridge Environmental Defense League, described his concerns with the draft air permit as three legs to a stool: These include that the permit, though classified as a minor NSR permit, said the projected emissions reflect a project with a much greater impact. He said calculating the projected nitrogen oxide emissions  written in the permit, he said that potential output exceeds by a factor of six times the benchmark for a minor source. He said there are gaps in details about monitoring and reporting data about the compressor station activities. The second leg, he said, include that the State Air Control Board is responsible for monitoring the compressor station’s activities, but said there are inconsistencies about the claims from the state board about their responsibilities toward the compressor station.

Lastly, he spoke about the Buckingham County Board of Supervisors and local governing board and questions about the use of Agricultural-1 zoning for the compressor station’s special use permit. He said he expects to take the compressor station projects, its disproportionate impact on the Union Hill community to the Virginia Supreme Court.

“The bottom line is that the DEQ cannot approve this permit,” Zeller said.

He had 40 seconds left for his comment period, and said he would use the rest of his time to sing a song.

Zeller walked back to his seat, singing. Representatives of DEQ asked Zeller to stop. When Zeller continued, a representative notified police officers on-site, and Zeller was escorted out of the building by members of the Buckingham County Sheriff’s Office.

Kay Noble Carter, a retired Dominion Energy employee, said she worked with Dominion on right of way acquisition with a focus on acquiring easements for electric transmission line construction and said they have worked with major corporations and communities on projects.

“Dominion Energy worked hard and still does to hold the impact of these infrastructure projects to a minimum,” Carter said, and said the county has 41 conditions in the special use permit to address citizen concerns.

Derrick Hollie, of Stafford, is president of Reaching America, an organization that addresses issues relating to black Americans. He spoke in support of the air draft permit and said the pipeline would meet a need for energy resources.

“We’re impressed with the developer’s commitment to protecting our natural resources,” Hollie said.

Connor Woodridge, with Columbia Pipeline, also spoke in support of ACP and echoed Hollie’s comments about being impressed with the developer’s commitment and said it would provide additional resources for people in the state and for Columbia customers.

Heidi Dhivya Berthoud with Friends of Buckingham asked for a 30-day extension of the public comment period and asked that the DEQ require and complete a quantified risk assessment and work with other state agencies to identify health, air and pollution impacts.

Leslie Cockburn, democratic candidate for the 5th Congressional District, said she agreed with the NAACP which asked that the air control board reject the permit.

She said she would take this issue to congress and not let it rest.

“This is a freedman community,” Cockburn said. “This is a community where a third of the residents are descendants of slaves, freed either before the war or just after. This land is their land. Dominion has no business putting a massive compressor station in this community.”

She said the National Forest Service rejected the ACP due to ill effects on wildlife.

“How is it that we can subject the people of Union Hill to this travesty?” Cockburn said.

Swami Sugunananda with Yogaville said the clean air in the area healed her and many others in the community.

“We are part of nature,” Sugunananda said. “Pollute nature and we’re polluting ourselves.”

A meeting Thursday at the Buckingham County Peter Francisco Auditorium offered an overview of and some answered questions relating to... read more