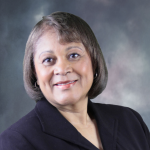 Lee’s book, “Trails and Trailblazers,” covers the history of a century of public education in Lunenburg County. The book begins with 1870, when free public schools were mandated by the Virginia General Assembly, and traces events through 1970, the first year that schools were fully integrated in Lunenburg. The author was a member of the history-making senior class that graduated in 1970 from Central High School of Lunenburg.

After high school, Lee earned her bachelor’s and master’s degrees and pursued a career in education. In July 2008, she retired from her position as an elementary assistant principal with the Prince Edward County Board of Education after 30 years of service in education. In August of the same year, she accepted part-time positions at Longwood as a University Supervisor and Tutoring Coordinator.

The Moton Museum is a historic site that played a major role in the ultimate desegregation of schools in Prince Edward County and elsewhere. It houses a well-done museum that chronicles this story. The public is invited to the book-signing event at the museum. Barnes and Noble of Farmville is supplying books that will be available for purchase at the event.

The fourth annual Harvest Moon Champagne and chocolate Gala will be held Friday, Oct. 19, from 6-8 p.m. at the... read more