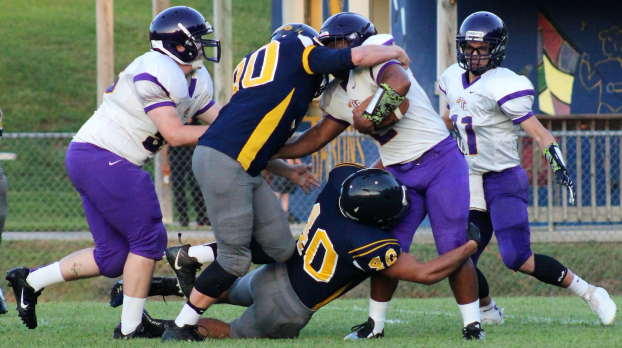 Prince Edward County High School’s varsity football team fell behind significantly early on in Wednesday’s road game against Bluestone High School, and though the Eagles clamped down on the Barons and began to climb back into the contest, they could not fully recover, ultimately falling 28-14.

“They scored 28 points in the first quarter on — basically — our miscues,” Eagles Head Coach James Ford said. “The opening kickoff, we had a miscue. We couldn’t move the ball, offensively. We just were out of sync, and I don’t know if it attributes to playing on a Wednesday or just with the short preparation or I don’t know.”

The game was moved up to Wednesday due to inclement weather expected to be brought to the region over the weekend by Hurricane Florence.

“Take nothing away from Bluestone,” Ford said. “They were hyper-aggressive. They gave us fits up front.”

But Prince Edward was able to claim the momentum.

In the second quarter, freshman quarterback Nate Reed connected with senior wide receiver Rah’Quan Payne for a 39-yard touchdown pass. The two-point conversion attempt was good, and the score was 28-8 at halftime.

The Eagles also scored in the fourth quarter when senior running back Rahme Marshall ran for a 7-yard touchdown.

Ford said what accounted for the change in his team after the first quarter was improved play on defense.

“We made the proper adjustments that we needed to make,” he said. “(The Barons) didn’t do anything that we didn’t see on film. We just were out of sync. … It was hard for us to come back from, with us being so young.”

For the game, Reed went 10-for-20 passing for 106 yards, a touchdown and two interceptions. Marshall led the team with 87 rushing yards and a score on 12 carries.

Senior running back J’Sean Dupuy had only two carries for 13 yards after being held out on offense for precautionary reasons following an early aggressive tackle.

He played on defense, though, along with senior defensive back Tajh White, who returned from suspension to lead the team with nine total tackles.

“It was really good to be back to almost normal, but now we’ve just got to get back in sync,” Ford said.

The Eagles (2-2) host Randolph-Henry High School on Friday at 7 p.m.

Tigers look to rebound from 0-2 start