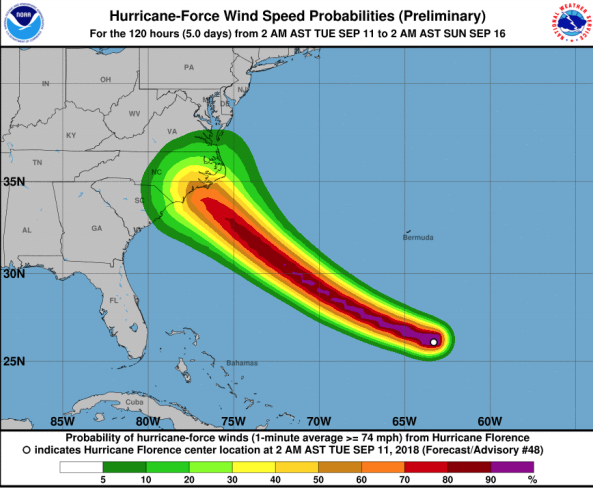 Pictured is a graphic detailing probabilities of hurricane wind potential along the east coast as a result of Hurricane Florence. Tropical storm weather conditions could hit the Heart of Virginia, and the east coast, as early as late Wednesday.

Hurricane Florence, a category four hurricane as of early Tuesday morning, is expected to make landfall in the U.S. early Friday with indications that the storm may slow down/stall after landfall into the weekend. Residents in the Heart of Virginia may see tropical storm weather conditions as early as late Wednesday.

While uncertainties remain about the projection of the hurricane, damaging hurricane force winds may become more likely along the North Carolina coast, reports from the National Weather Service (NWS) Tuesday morning cited.

Hurricane Florence may slow or stall during its course, “leading to a prolonged and exceptionally heavy rainfall event.”

A meteorologist from the NWS in Wakefield offers a look into how this storm could affect people in the Heart of Virginia, including threats of high winds and flooding.

“Right now there’s still some uncertainty about the track,” NWS Meteorologist Eswar Iyer said Monday about the path of the hurricane. “The main threats would be heavy rainfall and flooding, in addition to some gusty winds, and depending on the track it takes those impacts could potentially be very significant.”

The possibility of high winds and flooding can be daunting. For residents and families preparing for the storm, Iyer recommended visiting the NWS Wakefield website, which has resources for protecting one’s homes in the event of a hurricane.

Recommendations include securing one’s homes by covering all of the windows.

“Permanent storm shutters offer the best protection for windows,” the website cited. “A second option is to board up windows with 5/8 inch exterior grade or marine plywood, built to fit and ready to install. Buy supplies before the hurricane season rather than waiting for the pre-storm rush.”

“Take refuge in a small interior room, closet, or hallway on the lowest level during the storm,” the website continued. “Put as many walls between you and the outside as you can. Stay away from windows, skylights and glass doors. If the eye of the storm passes over your area, there will be a short period of calm, but at the other side of the eye, the wind speed rapidly increases to hurricane force winds coming from the opposite direction.”

Following instructions from local officials and listen to National Oceanic and Atmospheric Administration (NOAA) Weather Radio or other radio or TV stations for the latest storm news are also listed.

Virginia issued a state of emergency Saturday in anticipation of damage from the storm.

“A state of emergency allows the Commonwealth to mobilize resources, including the Virginia National Guard, and pre-position people and equipment to assist in storm response and recovery efforts,” a release from the Office of the Governor cited.

Buckingham County Administrator Rebecca Carter announced Monday that the county is set to declare a local state of emergency in anticipation of the hurricane and that the county’s emergency services released robot calls to county residents alerting them to the hurricane and reminding them to purchase supplies and establish an emergency plan. Shelters are expected to open at Buckingham County Middle School if needed.

Cumberland Board Chair Kevin Ingle said the county’s fire and rescue departments are prepared to respond to emergencies, and that the county’s schools and department of Social Security will establish shelters at the high school/middle school complex.

Pempel said the fire department can respond to fallen trees, though said trees too large to move would have to be handled by the Virginia Department of Transportation.

Butler said the rescue squad will have additional crew ready to respond to emergencies, and encouraged participants to stay away from flooded areas.

Farmer encouraged households to stock at least 1 gallon of water per person, per day for the duration of the storm. He also encouraged people to keep a three-day supply of food, a supply of flashlights, batteries, medication, sanitation items and a working cellphone and charger.

Piedmont Senior Resources, in a social media statement, encouraged participants to also fill their vehicle tanks with gasoline before the storm, and to also keep enough gasoline for one’s generators.

Citizens will have the opportunity Tuesday evening to give input to the Prince Edward County Board of Supervisors with regard... read more