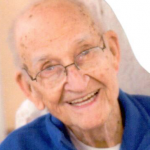 He was a proud U.S. Army veteran with 26 years service. He served in the 101st airborne division in both World War II and Korea. Upon retirement from the Army he worked at Fork Union Military Academy.

A funeral service will be conducted at 1 p.m. on Friday, August 17 at the Virginia Veteran’s Cemetery in Amelia, 10300 Pridesville Road, Amelia, VA.

On August 12, 2018, Robert Herman McKay passed peacefully into the presence of our Lord and Saviour Jesus Christ at... read more