William “Bill” Frank Coleman, 57, of Fredericksburg, formerly of Buckingham, went home to be with his Lord and Savior after a courageous fight from many illnesses while battling Multiple Sclerosis on August 13, 2018 at the Hospice House of the Piedmont, Charlottesville. 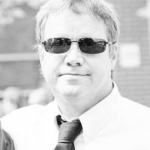 Bill leaves behind many loved ones; Mother-in-law, Shirley K. Slay, Sister-in-law Susan Pitts and husband Mike of Laurens, SC; Brother-inlaws; Mike Slay and Yancy Slay of Laurens, SC. Along with many nieces and nephews.

Bill was a graduate of Buckingham County High School and then attended Piedmont Virginia Community College. Bill furthered and completed his education at Virginia Tech, where he graduated and earned a B.S. in Computer Science Engineering. Upon completion of college Bill started a 33-year career at the Naval Surface Warfare Center, Department of Defense Dahlgren Division on September 1984 and retired June 2018.

Bill worked for the Tomahawk Weapon Control System, as a Software Development Lead. He later became the Branch Head of the Weapons Engineering Branch and then Deputy Program Manager for Naval Service Combatants. As a branch head at NSWC, he always took pride that he was “working for the warfighter,” as he would always say.

He used that position as a platform for redemption and second chances, always finding the good in people. Those characteristics along with his unassuming modesty, earned him the respect of all who were fortunate enough to have known him. Bill loved old things, whether it be radios, books, southern rock music especially Lynyrd Skynyrd, trucks or dogs. He always yearned for a simpler time. He loved history, especially beloved Buckingham and Civil War history. Bill received many awards including; Letters of Appreciation, Letters of Accommodation & Performance Awards, 2013 NSWCDD Center Honorary Award for Employee Development (Recruiting, Mentoring of Student Employment Program as well as recent College Graduates).

Bill’s invaluable contributions to the US Navy & Marines of expertise, technical knowledge, skills and dedications helped him with an amazing and productive career. Bill was an Eagle Scout, Cub Scout Master, Baseball Coach as well as Civil War Reenactments.

Bill was involved in many different activities with his sons, friends and family. History lover, writer, outdoorsman and hunter. Bill loved all people, helping people, being with people, leading people. Bill had amazing faith, loved God and relied on his prayer & and his church.