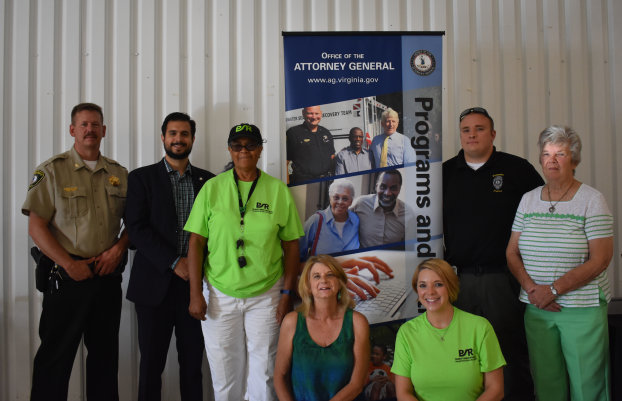 Fraud and identity theft pose real danger for residents in the Heart of Virginia.

Prince Edward County TRIAD, an organization that partners with area law enforcement and government agencies to prevent crime that targets elderly residents, held an event Friday to advise people on how to identify and report crimes such as telephone calls meant to steal residents’ identity or financial information.

The event, held at the Fireman’s Sports Arena, included a free luncheon and a raffle where participants could win prizes. Prince Edward County TRIAD coordinator Karla Ellington said the event was meant to celebrate its ninth anniversary in the area in addition to discussing crime prevention.

Ellington, during the event, said a participant spoke to her about a concern about a situation that she thought could cause harm. Ellington said while the situation was resolved, she praised the participant for speaking up and encouraged seniors to be aware of their surroundings and to speak with law enforcement and county organizations if they see something amiss.

“There’s so much evil … out there,” Ellington said during the event. “With all of us coming together and getting educated … we can help one another.”

David Malakouti, outreach coordinator for Central Virginia with the Office of the Attorney General, spoke about TRIAD and how the state and organization work together to spread the word about fraud-related crimes and encouraging participants to use and share their knowledge with others.

Prince Edward County Sheriff’s Office officer Sarah Coen identified the most common instances of fraud reported to the sheriff’s office recently. These instances include a caller saying a loved one is in jail, and they need residents’ money to bail them out; callers offering financial aid, or free money; calls from the IRS (Coen said the IRS would not contact clients over the phone); callers claiming to be deputies and Dominion Energy asking residents for money for unpaid citations (the sheriff’s office or Dominion will not contact residents by phone); requesting gift cards for claims that participants won prizes, even one call from a supposed kidnapping incident where the caller asked the resident to buy gift cards.

Malakouti said Virginia is one of the few states that works directly with TRIAD organizations. Regarding crimes such as fraud and identity theft, Malakouti said knowledge is power. “You all are a resource for each other,” Malakouti told the audience Friday, saying he has spoken in Prince Edward County in the past and enjoyed seeing people he met at past events. He encouraged people to share what they know with others.

When residents are faced with a potential crime incident, Malakouti encouraged them to contact area police and other organizations that work with elderly residents. “We always want to make sure that public safety is always on the forefront,” Malakouti said, citing the importance of having opportunities to learn about crime prevention in the community, while also making sure the events are fun and offer time for fellowship with friends and neighbors.

“Public safety threats are always changing, always evolving. Seniors are not immune from that, whether it’s identity theft, different types of cybercrimes, financial abuse of older Virginians, there’s a lot of people trying to take advantage of seniors,” Malakouti said, quoting a statement from Attorney General Mark Herring. “But we want to make sure there is that connection, that you know you can reach out to … if you’re having a problem, and you want to get resources.”

Representatives of area and state organizations such as Virginia Grand Driver, Piedmont Senior Resources, Virginia Bureau of Insurance, Seniors and Law Enforcement Together and Home Recovery Home Aid also participated in the event and offered resources.