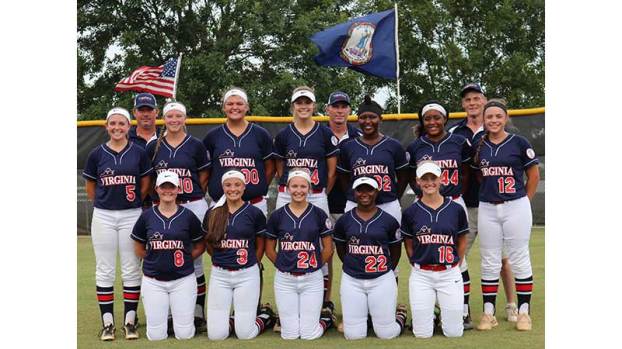 The Prince Edward-Farmville Youth Association (PEFYA) Debs All-Star softball team produced — for the third consecutive year — a remarkable summer that was capped by the girls representing the state of Virginia at the Dixie Softball Debs World Series in Alexandria, Louisiana. To qualify for the World Series each year, the PEFYA All-Star team has had to win the state tournament, a feat it accomplished this year in front of a home crowd at the PEFYA Field of Dreams complex in Farmville. The Prince Edward-Farmville All-Stars went a perfect 10-0 across the 2016 and 2017 state double-elimination tournaments, but they were challenged to a new degree this summer. In their second game of the 2018 state tourney, the PEFYA girls suffered a surprising 20-8 loss to the Powhatan National All-Stars. It was a shocking contrast to Prince Edward-Farmville’s opening night 23-2 rout of the Brookneal All-Stars. But the home team responded to the adversity like a champion, eliminating the Blackstone All-Stars with a 7-2 win, the Buckingham All-Stars with a 7-3 victory, the Lunenburg All-Stars with a 17-7 win and the Clarksville All-Stars with a 21-11 championship game triumph. Representing Virginia, Prince Edward-Farmville showed some fight in the World Series but fell 10-7 to South Carolina and then 18-1 to North Carolina. PEFYA Debs All-Star team members pictured are, from left, front row, Maddie Moreland, Gracie Hodges, Madelyn Bickford, Alexis Gayles, Brooke Landis; back row, Hannah-Gray Schmidt, Abby Roach, Caroline Seal, Mary Grace Amos, T’Asia Beasley, SaRoya Walton, Sierra Wharam; back row, Manager David Schmidt, Coach Michael Roach and Coach Johnny Hodges. Not pictured is Shauneice Beasley, who had a previous engagement that prevented her from being able to play in Louisiana. (To nominate your favorite team or standout group for High Five!, email a photograph and names of people pictured to HighFive@FarmvilleHerald.com.)

The Buckingham County Major League All-Star team has been busy the past three weeks, practicing and raising money for its... read more