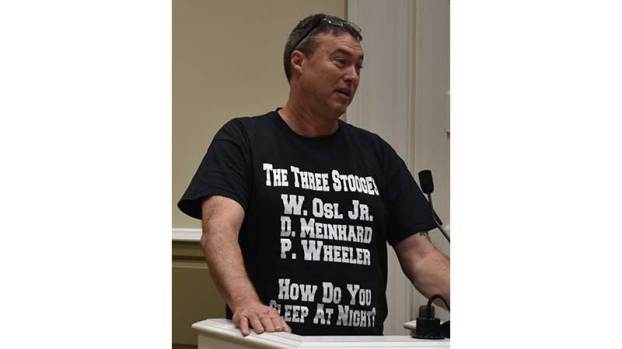 Bruce Allen describes the effects that the proposed Green Ridge landfill has had on his home value during a Cumberland County Board of Supervisors meeting Aug. 14. (Photo by Emily Hollingsworth)

Conversation and actions about the proposed Green Ridge landfill have taken place prior to a meeting that is set to be held by Green Ridge on Tuesday, 5 p.m., at Cumberland County Elementary School to describe the steps the company would need to take to apply for a permit with the Virginia Department of Environmental Quality.

The email cited that graves belonging to African-American people are located at the Green Ridge Landfill south cell site.

“We have photos and have recently made our politicians aware,” the email cited. “There are also unconfirmed sites located in the Green Ridge Landfill north cell. We hope you will support our initiative to bring local university archaeologists, to preserve and protect, any structural sites and/or burial sites located on the 1,200 acre proposed landfill site.”

CCLA was a organization created by residents in Cumberland and Powhatan counties following the announcement of the landfill at the end of May.

The eight members of the public who spoke during the Cumberland County Board of Supervisors public comment period Aug. 14 also asked questions and voiced concern about the proposed Green Ridge facility.

Hubbard Sprouse thanked District Four Supervisor David Meinhard for holding a town hall meeting for the public before the landfill was voted on but said the residents need more transparency from the board.

Describing a board meeting in March about the county’s refuse hauling services, Sprouse, who spoke during the March meeting, said the majority of the news surrounding the hauling services came from word of mouth.

“What we need here, is we need transparency from you guys what’s going on,” Sprouse said.

Betty Myers asked why the county paid for an outside attorney for court cases relating to an injunction and referendum for the landfill when the county is struggling financially.

Christal Schools said she had an extensive background working with county tourism, volunteer coordination and real estate. She moved to Cumberland to figure out what she was going to do with her future.

“And then the dump was dumped in my lap,” Schools said.

“You all have done your deal,” Schools said about the board of supervisors members’ decision to approve the landfill. “You signed the dotted line and you have washed your hands of this.”

She said her hope is to stop the landfill and help the county thrive using her skills and background experience.

“There truly is potential here,” Schools said about the county.

Ronald Tavernier also addressed transparency during the meeting, and asked why residents could not receive details about past landfills in the county including a landfill from Republic Services that the county entered into a host agreement with in 2006 and was not built.

Bruce Allen said he met a Realtor who told him his house located on Miller Lane would lose approximately 50 percent of his home value. He said he has another house he was building on the other side of the proposed landfill site that is also expected to lose housing value. He cited a home assurance program by Green Ridge that cites it could offer some compensation for homeowners who live within a half-mile of the site. He said it could be years before he sees any compensation for the house on the eastern side of the landfill, which would be built after the western side.

He said he lost 50 percent of his home value in six weeks.

“How would you feel?” Allen asked members of the board as audience members applauded. He said one house has a well approximately 70 feet from the landfill site.

Joy Cabarrus Speakes was honored for her service to the Robert Russa Moton Museum earlier this month, particularly for founding... read more