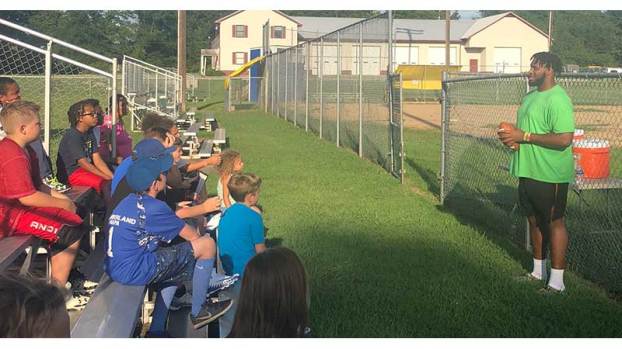 Jackson makes an impact while back home

Some young participants in Cumberland County Recreation Department’s football offerings benefited from a big, special visitor this summer that helped train them for the fall season. That visitor was Virginia Tech redshirt sophomore offensive lineman T.J. Jackson, who graduated from Cumberland County High School in 2016.

Jackson is the first scholarship NCAA Division I football player to come out of the Cumberland school.

Cumberland Rec Football Coach Andy Crenshaw said, “He gave our players an opportunity to slap hands with someone from little Cumberland that is playing at the next level.”

The 6-foot-6-inch 333-pound football player said his thoughts were turned toward the youth in Cumberland after seeing children from elsewhere coming to Hokies practices and sending him messages on social media.

“I just wanted to go home to a place where there’s not a lot of recruitment going on, and it’s not really a big area, so I wanted to go home and just give them motivation in life — ‘You can make it anywhere,’” Jackson said. “And just to see them kids loving the little drills I was doing with them and just talking to them and them actually listening and paying attention was just big for me, because who would have thought a boy that grew up there was just going to change their life with just one day. So that was a big motivation for me to just come back home. Just being around it all the time here at school with the kids and stuff just made me want to go back home and just help out with them.”

Crenshaw expressed his appreciation for Jackson coming and working with his players on the field and giving them some key instruction off of it.

The coach said the fact that Jackson would take his time during the summer to come out to a practice and help out meant a number of things to him. Some of the meaning was tied to the fact that they are family.

Crenshaw said it meant personally having his younger cousin help him, “someone that I taught how to play drums when he was young in age and watch grow into the man he is today on and off the field.”

The coach said having Jackson help also meant “having him now contribute back to my son — his younger cousin — and the county while continuing to be an inspiration to the community.”

Jackson had an interesting journey on his way to being a Division I college football player.  He became serious about football quite late in his youth. When he was of age to play Cumberland Rec Football, he played for less than a season.

“I played for like two weeks, and I was done,” he said. “I really didn’t play football when I was little, but I got to experience the youth league for a little bit.”

As a high school sophomore, he played football for Fuqua School on a team that made it to the state championship game, then he transferred back to Cumberland and didn’t play as a junior, focusing instead on basketball.

But he returned to the gridiron as a senior and after playing then, he drew college interest and is looking to get more playing time this coming season at Virginia Tech.

“The players really enjoyed the drills and excitement T.J. brought to the table,” Crenshaw said. “We wish him all the best as he looks forward to the upcoming season and want him to know that Cumberland Rec Football is rooting him on.”

Dukes return to the links

Cumberland County High School’s varsity golf team was ineligible to compete last year due to lack of participation, but the... read more