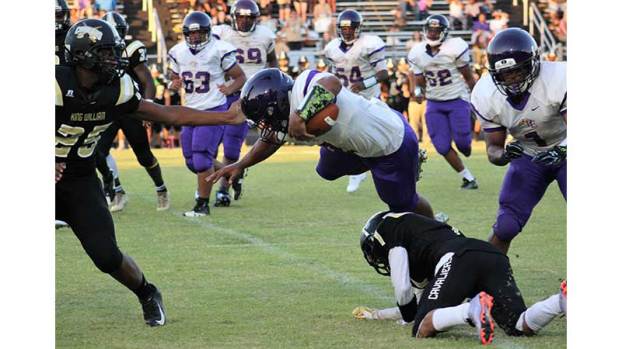 Prince Edward County High School senior running back Rahme Marshall flies over a defender Friday as another Cavaliers player looks to halt his advance. The visiting Eagles struggled due to injuries and a strong Cavaliers squad as the home team ended up winning 72-6. In addition to Marshall, Eagles pictured are, from left, Omarion Allen, James Morgan, Chris Campbell, Sa’Vyon Battle and in foreground, Jarrel Robinson. (Photo by Tamara Marshall / PECHS Yearbook Staff)

Some key Prince Edward County High School players missing due to injury and a strong King William High School varsity football team added up to a rough season opener for the visiting Eagles on Friday. The Cavaliers led 31-0 after the first quarter, 59-6 by halftime and they ended up winning 72-6.

But as of Wednesday, Aug. 22, the Eagles appeared on track to have in the lineup senior quarterback/defensive back Kahare Sutton, senior center/defensive tackle Jarmal Joyner and junior wide receiver/defensive back Aaron Carter.

The trio did not prove to be healthy enough to play, leaving Prince Edward in a difficult spot.

“We were scrambling, and we knew King William was a good team,” Eagles Head Coach James Ford said. “On film, (the Cavs) were really good, and the teams they scrimmaged were bigger schools, and they showed well against them. So we knew that we had our work cut out for us, but we didn’t know we were going to be without five guys who basically start on both sides of the ball.”

Ford said King William was everything it was advertised to be as it aims for its 10th straight Tidewater District championship.

“They did exactly what they were supposed to do,” he said. “They came out, they put pressure on us early, they took advantage of our youth, and we just weren’t able to recover.”

The coach did make a point to give credit to his young players, though, as they took on a team that the 2017 Eagles defeated 52-46 at home.

Prince Edward’s lone score came when senior Jarrel Robinson ran for a 64-yard touchdown in the second quarter after the Cavs had gone up 59-0.

The Eagles’ powerful, returning backfield was healthy, but Ford noted it struggled to be effective because of a young line and an excellent King William defense. Prince Edward totaled 117 rushing yards, led by Robinson with three carries for 61 yards and a score.

Taking all the snaps at quarterback was Eagles freshman Nate Reed, who went 4-for-10 passing for 69 yards and one interception.

“He didn’t play badly,” Ford said. “He did his job, he tried to get the ball to the guys, get (it) to our playmakers.”

Sophomore Omarion Allen filled in a center for Joyner.

Prince Edward (0-1) hopes to be healthier this Friday when it hosts Altavista High School (1-0) at 7 p.m.

“We’re hoping to get Carter back this week, which should help us in the defensive secondary,” Ford said. “As far as Kahare and Jarmal, we’re not exactly sure, and it’s kind of tough when you’ve got two senior leaders in the middle of your offense go down, and they both play in the middle of the defense also …”