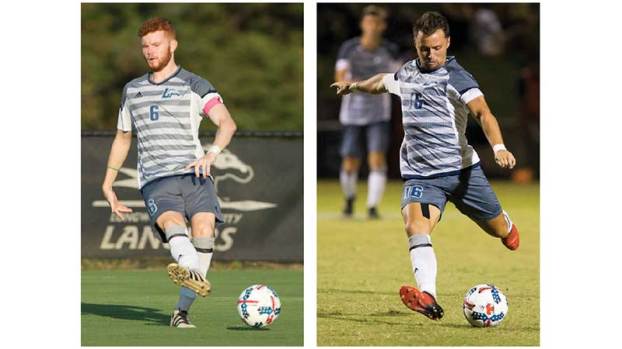 “We at Longwood are thrilled that Eoin and Tom have found a path to get their respective professional careers up and running,” said Longwood Men’s Soccer Head Coach Jon Atkinson, who brought in both Devitt and O Donovan as part of his 2016 signing class.

Devitt, who anchored Longwood’s backfield and earned All-Big South second team honors as a senior, signed with English National League side Gateshead Football Club — a club playing in the fifth division of the English Football League. That pro contract followed a two-year career in which Devitt started every game for the Lancers. He served as team captain and played a team-high 1,673 minutes as a senior, playing all but 10 minutes of the season. His work on Longwood’s back line helped the Lancers amass 11 one-goal games and allow more than two goals on just three occasions throughout the season.

“Tom didn’t have far to travel to his new club, and I’m sure he’ll work up the ladder in his profession and be a success as he has all the tools at hand,” Atkinson said.

Meanwhile, O Donovan begins his career with the FC Bruno’s Magpies, joining the Gibraltar Second Division team. FC Bruno’s are a club that was founded in 2013 and finished third last season in the Gibraltar Second Division. During his time at Longwood, O Donovan scored three goals and dished two assists for eight points in 35 matches played and 25 starts. He produced two three-point games, including one in his first career Longwood appearance at Virginia Military Institute (VMI) to begin the 2016 season.

“Eoin has landed himself a nice gig in Gibraltar which will not only give him a platform but a phenomenal life experience to boot,” Atkinson said.

Devitt and O Donovan were part of a 10-member senior class for the Lancers in 2017.

Atkinson and the Lancers have reloaded with a 19-member incoming class, which joined the program for preseason camp beginning last week and will make its debut in a Lancer uniform Friday, Aug. 24, at VMI. Kickoff is set for 4 p.m. in Lexington.