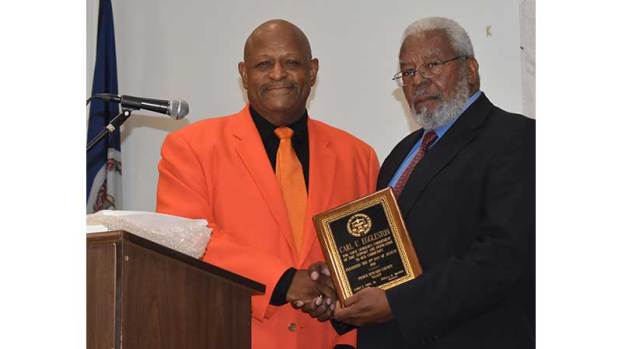 The year 2018 marks 50 years that Eggleston served in the funeral profession, 40 years since he received his degree in mortuary science and 35 years since he opened his doors to Eggleston Funeral Establishment.

A celebration, which took place Saturday at Firemen’s Sports Arena, included a banquet; representatives from several organizations, including the Virginia Morticians Association, the Prince Edward County and Nottoway County NAACP, the Elk’s Lodge chapter #269, the National Negro Golf Association and representatives of the Jeffers Funeral Home in Charlotte County where Eggleston worked; guest speakers; a presentation about Eggleston by Charles White Jr., who is co-writing a book with Eggleston.

Noting his political activism, particularly with the state and regional government and his role in former Gov. Douglas Wilder’s election, Eggleston received letters from the Office of the Governor, State Sen. Jennifer McClellan and a note from U.S. Representative Don Beyer, who donated $1,000 to the event.

Eggleston was the first African-American to be voted into the Farmville Town Council.

Katz Band, from Richmond, performed after the celebration.

Eggleston was only 17 when he first went into the funeral service profession in 1968. He was impacted by the closing of Prince Edward County Public Schools, only being able to attend school for two years after moving to Cumberland County.

After getting his start with E.B. and Vera Allen from E.B. Allen Funeral Home in Farmville, and apprenticing with E.F. Mimms Funeral Home in Richmond, where he impressed Mimms so much he received a $50 raise within the first week, he received his associate in mortuary science in 1978 and worked for several funeral homes until establishing his own in 1983. In 1989, Eggleston also opened the Oliver and Eggleston Funeral Home in the town of Crewe and has a foundation, which donates school supplies and Christmas presents to families who live in poverty.

Alberta Eggleston Person was Eggleston’s first client as a mortician.

She said more than 35 years later, the audience is celebrating the business, and the endurance, struggles and triumphs faced by Eggleston and others during the business’ operations.

“He combined this initiative with his commitment to serve others as well,” Person said. “These endeavors have continued to be his primary focus in life, demonstrating his skill as an entrepreneur of the highest order, his integrity and strong character as an individual, and his steadfast support of community and family.”

Person asked Eggleston to bury her father, and his grandfather, George C. Eggleston Sr. She said he carried out the request impeccably and professionally.

Quoting an African-American spiritual, “We are Climbing Jacob’s Ladder,” which says, “Every round goes higher, higher,” Person encouraged Eggleston in his future successes.

“Congratulations to Carl and his wife, Barbara, on this special day,” Person said. “We all wish you continued success. The community of Farmville and surrounding counties will only be the better for it. And remember, Carl and Barbara, keep climbing.”

Eggleston thanked loved ones, friends and members of the audience who attended Saturday’s event. He wore the signature orange jacket from the golf association.

Eggleston said his wife, a retired school teacher, works at the funeral home and refuses to take payment.

James Ghee, president of the Prince Edward NAACP, presented Eggleston with a plaque for his service with the organization.

He mentioned that Eggleston was a former president of the branch NAACP and said he led the branch with great character and made a profound impact in the county through providing representation of African-American people in local government.

“We here in the Prince Edward branch are fortunate to have had lots of branch presidents, but none as outstanding as Carl in his efforts to make sure people of color were represented in every aspect of life,” Ghee said. “To make sure all people here in Prince Edward had representation on Town Council, on the Board of Supervisors, Carl led the litigation to make sure we had one man, one vote in our county by making town council wards rather than at-large, and by ensuring that all residents of the town had an equal voice.”

Speaker Carl Hutcherson spoke about knowing Eggleston when first attending mortician school. He said he was glad to hear when Eggleston received the $50 raise from Mimms, and more glad still when Eggleston returned to Farmville to make a difference in the area.

“We are proud,” Hutcherson said, who owned a funeral home in Lynchburg. “We are awfully proud of the work that he has done.”

During his comments, Eggleston asked audience members to be involved in a fundraising effort to install a highway marker for Oliver Hill in the Town of Farmville. Hill was a civil rights attorney instrumental for ending racial segregation in the United States, particularly for the Prince Edward County school division. Eggleston said the cost would come to approximately $2,000.

During the event, Carl and Barbara Eggleston, with MC Perry Carrington, speaker Bertram Davis and the Rev. Calvin Gray burned the mortgage note for the funeral establishment in Farmville.

Gray spoke about the struggle of starting a small business and paying off a mortgage, and the success of paying it off.

“When so much is relying on your faithfulness, and your commitment, and your focus and your dedication, it means so much when you get to that final stage, and you’ve finished your obligation,” Gray said

Eggleston, according to the event program, made his last payment in July.

The lights dimmed as they placed the note, now alight, into a metal container.

“And this is the moment in which we are together, standing with Carl and saying, ‘well done,’” Gray said.

The Farmville Police Department announced in a press release it is investigating a single-vehicle crash that reportedly caused a wide spread... read more