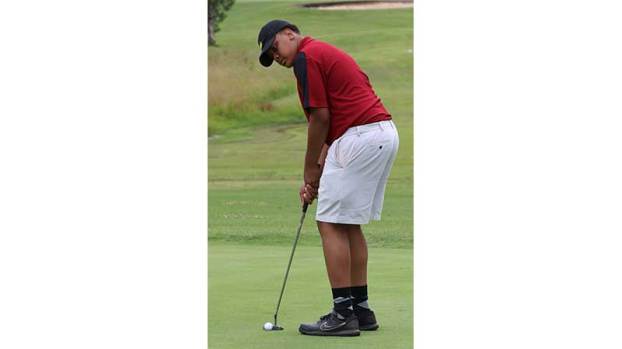 Cumberland County High School’s Calvin Foster is one of four freshmen on the Dukes varsity golf team this year. (Photo by Titus Mohler)

Dukes return to the links

Cumberland County High School’s varsity golf team was ineligible to compete last year due to lack of participation, but the Dukes are back this season with a young corps of players.

The minimum amount of players required to produce an eligible score in competitive matches is four. Last year, Cumberland had only one player, Thomas Bryant, a freshman who competed to gain experience as an individual. This year he returns to lead a group of five Dukes that are already 1-1 after one event.

“I would like to try to get six (players) as a team,” Cumberland Head Coach Monroe Preston said. “Six can play at once, and you count the score of (the) four … best scores.”

The 2018 roster features one sophomore and four freshmen. Bryant is the sophomore, and the landscape of expectations has changed significantly for him compared to what it was last year.

“I’m looking for big things out of the No. 1, Thomas Bryant,” Preston said. “… I think he’s got a good swing, and he played pretty good last year out there, so I’m thinking that he should do pretty good. We did play a match last Thursday, and I was a little disappointed in the score that he shot. He’s got a better swing than that.”

But Preston made a point to acknowledge that the pressure of expectations can be a lot to handle and can make things more challenging for a young player like Bryant.

“I just think he just needs to hit more balls, get more reps in, and I think he’ll be alright, just get out there and play and get more experience, and it might be the fact that we do expect more out of him this year, so being young and trying to meet the expectations of other people … I think after he gets out and relaxes a little bit, he’ll be OK,” the coach said.

The freshmen on the team include Calvin Foster, Michael Ward, Jack McCutchen and Brett Bamberg.

The Dukes opened their 2018 season Thursday when they faced Prince Edward County and Goochland high schools at The Manor Golf Club in Farmville.

Goochland won with a team score of 171. Cumberland placed second with a 241, edging out Prince Edward, which finished with a 243.

Contributing to the Dukes’ score were Bryant, Foster, Ward and McCutchen.

“From that match, I will say that I was real proud of Michael Ward, especially his short game,” Preston said. “I was proud of all of them, they did OK, but my expectation is they can do better.”

The coach said that by midseason, he thinks his players will have brought down their scores.

He noted he does not have any doubts about Bryant’s ability to hold down the No. 1 spot on the team, and he hopes to see dedication from his players that will help sort out the other spots.

In Thursday’s match, Foster played in the No. 2 spot.

“Overall, I think that his game and promise is there,” Preston said, “but (of) all of those kids, the No. 2 player is going to be the one that actually puts in the time. And right now, it’s Calvin.”

Foster developed his game over the summer as part of the Piedmont Junior Golf circuit.

Because his team is so young, Preston noted he does not expect it to finish high in the district, but he indicated that as the Dukes develop, they could be a handful for other teams.

After its Tuesday road match, Cumberland hosts Bluestone and Central Lunenburg high schools this Thursday at 3:30 p.m. at the Farmville Municipal Golf Course.

The Buckingham County Major League All-Star team’s tenure as the on-field baseball representative of the state of Virginia came to... read more