Beth Doyle has been named as the new Executive Vice President for the Centra Foundation. She succeeds Dr. Kathryn Pumphrey who retired earlier this year. 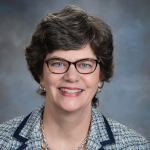 Beth, a native of Lynchburg, holds a degree in economics from the University of Mary Washington and has dedicated 30 years to nonprofit management.

Prior to joining Centra, Beth worked with the Annenberg Washington Program in Washington, DC, the Virginia Legal Aid Society in Lynchburg, and most recently served as the Director of Development at the Academy Center of the Arts in downtown Lynchburg. Beth managed the Academy’s $16.6 million capital campaign to restore the historic Academy Theater, while simultaneously increasing overall operating contributions by 131 percent during her tenure.

“Beth is a talented leader who is dedicated to improving the health of those who live and work in our communities,” says E.W. Tibbs, President and CEO of Center. “Centra welcomes Beth and looks forward to the Foundation’s continued growth under the leadership.”