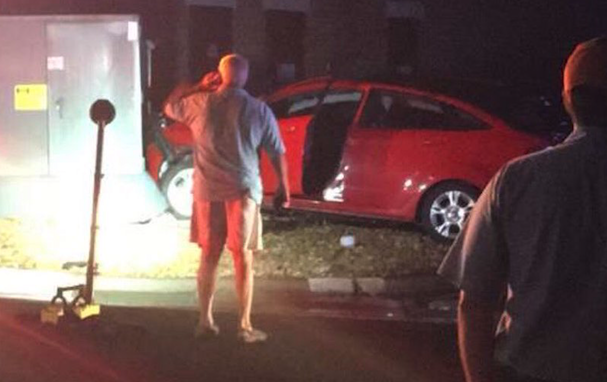 Pictured is the aftermath of a vehicle accident Monday that resulted in a power outage for more than 200 customers. The vehicle struck a power transformer along Midtown Square, off Fourth Street. (Photo by Nicholas Conigliaro / WRIC 8News)

Power has been restored to downtown Farmville and Midtown Square after a vehicle struck a transformer, reportedly creating a widespread power outage of more than 200 electricity customers for nearly 13 hours.

The Farmville Police Department announced in a press release it is investigating a single-vehicle crash Monday after the vehicle struck a power transformer along Midtown Avenue, just off Fourth Street.

Police and Dominion Energy, the company which operated the transformer, said the accident and subsequent power outage took place between 9:30-11 p.m. Farmville Police stated the accident was reported at 9:37 p.m. and Dominion reported that the outage took place at 10:41 p.m. Neither are certain for the reason of the reported time discrepancy, stating that the outage would have taken place immediately after the vehicle struck the transformer.

The driver, Michael Aaron Cook, 28, of Burkeville was traveling south on Midtown Avenue “when he lost control of his 2014 Ford Fiesta and struck a power transformer located within Midtown Square,” the release from the police department cited.

Chief Andy Q. Ellington said in a phone interview Wednesday the outage affected businesses and residents who live in the upstairs apartments in Midtown Square, as well as businesses in downtown Farmville.

Dan Genest, spokesman for Dominion Energy, said all 235 customers who are serviced by the transformer lost power as a result of the accident. He said the outage lasted approximately 12 hours and 53 minutes.

“We brought in a transformer from Alexandria, moved it down during the night,” Genest said.

He said all power was restored at approximately 10:34 a.m. Tuesday.

The driver, according to police, was arrested and charged with driving under the Influence. He was later released to a sober party.

Police said in the news release it is continuing its investigation into the crash.