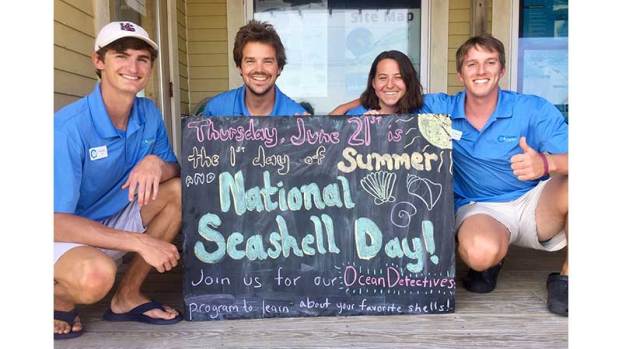 After hearing Pi Kappa Alpha fraternity brother and Hampden-Sydney College (H-SC) 2018 graduate Kyler Vela rave about his summer internship on Hatteras Island, H-SC rising senior Ian Duffy decided to see for himself what the fuss was about, a recent college press release stated.

“Kyler watched sea turtle documentaries around the clock, so I figured I should check it out,” Duffy joked in the release.

With an interest in corporate and environmental law, the foreign affairs major applied to the Hatteras Island Ocean Center (HIOC) Internship in hopes of receiving hands-on environmental experience, H-SC officials cited. They noted that the nonprofit center offers educational and recreational activities to the public with a goal to create a sustainable and economically thriving Hatteras Island year-round. The release highlighted that Duffy is one of four H-SC students who landed an internship on the beaches of North Carolina this summer working for the HIOC.

H-SC Assistant Professor of Biology Erin Clabough said, “This experiential learning course examines the intersections between conservation, history, science education, business and tourism on Hatteras Island in the Outer Banks of North Carolina. Seven students lived and worked as interns at the Hatteras Island Ocean Center in Hatteras, North Carolina, from May- August, where students gained firsthand experience with issues important to the island’s economy, culture and history.”

The release stated that the center plays a vital role in helping with the conservation of the island and its resources, and through his work, Duffy learned more than he ever expected about the natural habitat of Hatteras. Officials noted that from picking up a boa in the snake exhibit to informing the public about sea turtle patrol, Duffy has become an expert on the wildlife and conservation of the island. He has also immersed himself in the local culture and learned the importance of the fishing and tourist industries to the economy.

In addition to their hours at the center, interns also take an experiential learning class specifically designed to accompany the work at the HIOC, the H-SC release cited. It added that each student is required to complete a project of their choosing that will benefit the community. Selections range from expanding the center’s birding program, to exploring alternative energy, to making the island more environmentally friendly.

The influence of these projects is substantial, and in some cases immediate, H-SC officials said in the release. They stated that for example, the area coffee shop has switched to paper straws as a direct result of one intern’s lobbying efforts. Designing these projects individually gives students the freedom to pursue their interests while learning to take initiative.

The release highlighted how Duffy has chosen to install amber lighting on beachfront homes so that sea turtles, upon hatching, are not drawn to artificial light, therefore reducing their fatality rates.

“I’ve never done anything like this individually,” Duffy said in the release, “so it’s taught me to take ownership.”
Required weekly action reports and reflections help the students track clear progress on their individual projects and keep their goals and purpose clearly in mind, officials stated. They continued by noting that the reflections culminate in an organizational experience report that covers the internship, the theory behind the project, the agency worked with, personal intentions and an assessment of the overall experience.

The release concluded by citing that when their three months at the HIOC are complete, Duffy and his fellow Tigers can leave with the knowledge that they have helped improve the community and are therefore citizen leaders.

Farmville Town Council is set to vote on referring a conditional use permit for a proposed 52-unit apartment project on... read more