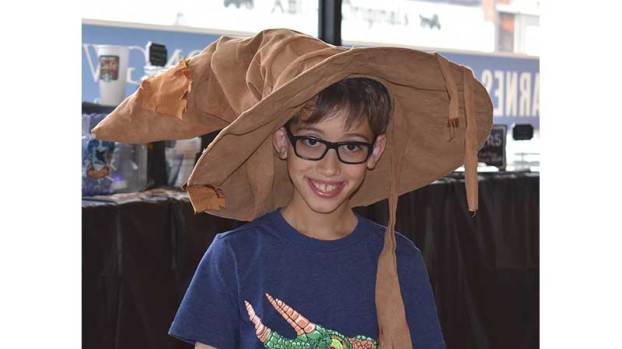 Tyson Bristol grins while wearing the Sorting Hat during a celebration of Harry Potter held at Barnes & Noble at Longwood Sunday. Bristol and his mother, Julie, were sorted into Gryffindor. (Photo by Emily Hollingsworth)

Barnes & Noble at Longwood, located at 200 N. Main St., was transformed into a magical world Sunday to pay tribute to Harry Potter, the central character in a book and movie series that has become a worldwide phenomenon.

Participants were able to be sorted into one of the wizarding school, Hogwarts, four houses: Ravenclaw, Hufflepuff, Gryffindor and Slytherin through the Sorting Hat. They also were able to get face and body paints, make slime, go on a scavenger hunt to find magical Horcruxes, and enjoy snacks such as chocolate frogs and Ollivander pretzel wands.

People wrote messages in pen about what the books meant to them on the paper bark of a Whomping Willow tree.

Erin Cole, store manager, read a story from “Tales of Beedle the Bard,” a collection of storybooks in the Harry Potter universe.

Bookstore employees and some of the participants donned capes and Hogwarts uniforms to get into the spirit of the event.

The event celebrated the 20th anniversary of the first Harry Potter book’s publication in the United States. “Harry Potter and the Sorcerer’s Stone” was published in 1998.

The event also celebrates the July 31 birthday of the protagonist, Harry Potter.

Cole said she made the majority of the decorations, which included everything from the Whomping Willow tree to a photo booth where people can pose under a “Wanted Wizard” sign.

“They’re all so excited every year,” Cole said about the children who participate.

Julie Bristol attended the celebration with her son, Tyson. She said Tyson and his grandmother began reading the Harry Potter series this summer. Bristol said the combination of coffee and Harry Potter was ideal.

“I thought we could come down, a good way to spend sort of a cloudy day,” Bristol said.

An investigation of the 2017 audit from Piedmont Regional Jail continues to be conducted by Virginia State Police (VSP), Prince... read more