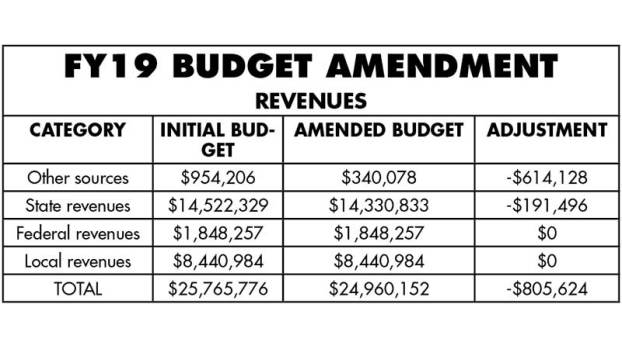 The General Assembly passing its budget meant Prince Edward County would have to amend its already passed FY19 budget as it pertains to Prince Edward County Public Schools. This table from the board of supervisors’ meeting packet shows the adjustment to the school budget from the county’s initially passed budget to its amended one.

The Prince Edward County Board of Supervisors voted unanimously at its July meeting to amend the fiscal year (FY) 2019 budget, reducing the amount allocated to Prince Edward County Public Schools (PECPS) by $805,624 in reflection of the budget that has now been passed by the General Assembly.

“It took a long time for the state to pass the budget,” Prince Edward County Administrator Wade Bartlett said. “Therefore, it impacted the schools more than anybody else in the state. The initial budget is the budget that we were presented by the schools, which used mainly the governor’s numbers for the state.”

“That is the budget that was advertised in the paper,” Bartlett said. “The school board never adopted a budget until they received the final funding once the General Assembly passed the budget.”

“That is the budget after the notification from the state of the state funding that the school will get,” Bartlett said.

“You see the decreases in funding,” Bartlett told the board, “almost $200,000 at the state revenues, over $600,000 on other sources, and the other sources, as you recall, that was mainly the local funding.”

He noted the schools had asked for a sizable increase in funding.

Another table in the board meeting packet provided a breakdown of school expenditures and how these changed from initial to amended budget.

Michael Sutton received the Lineweaver Family and the Juanita Urban Scholarship in the amount of $1,250 in May. Representing the... read more