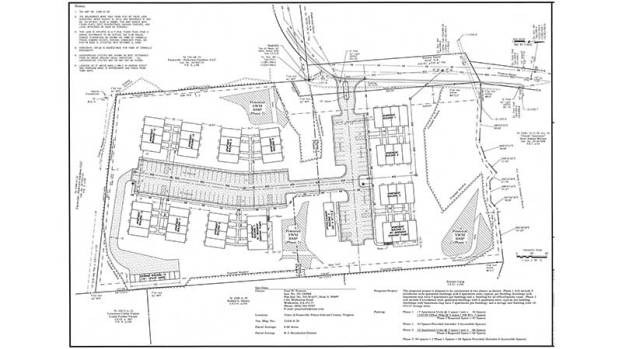 Farmville Town Council is set to vote on referring a conditional use permit for a proposed 52-unit apartment project on approximately 6 acres of land in the area of Vernon Street Wednesday, Aug. 8, to the Farmville Planning Commission.

According to documentation from the Farmville Town Council, applicant Fred Pearson, of Walkerton, requested that the project be built adjacent to existing Parkview Gardens, which is an 80-unit, multi-family apartment community.

The apartments for the proposed project, according to Pearson in a Wednesday phone interview would be built to look like townhouses with three bedrooms and three bathrooms.

The property, owned by Pearson, consists of 6.66 acres and is currently zoned as Residential-3 for multi-family dwellings.

Pearson said that he submitted full engineering and architectural plans for the proposed project.

The permit application requested two variances, or requests that deviate from the current zoning law.

The first zoning variance requested having an allowance of 14 buildings erected on a lot or parcel. The current law, under Section 29-147 only allows one building on any parcel for R-3 zoning. Each building would contain four apartments, Pearson said.

The second variance requests that the town allow a lot width of 457 feet in the frontage area, less than the section’s minimum required lot width of 815 feet “based upon the requirement of having 15 for each additional dwelling unit more than one,” the council meeting packet cited.

The variances were discussed and approved by the Board of Zoning Appeals during the board’s July 10 meeting. The variances had to be voted on before the planning commission and town council could consider the conditional use permit.

Pearson said he is expected to approach the Farmville Planning and Zoning Committee, as well as the Town Council in the future.

He said the units would not be built right away. Pearson said he expects to construct one building each year. Depending on whether or not the units sell, he said the number of buildings construction per year could rise from one to two.

Pearson said he owns other rental properties in the area as well.

“I really haven’t had any problems renting the units that I have now,” Pearson said. “It shows that there is a demand for it.”

Fuqua School has partnered with The GReat Aspirations Scholarship Program (GRASP) in an effort to make the school more accessible... read more