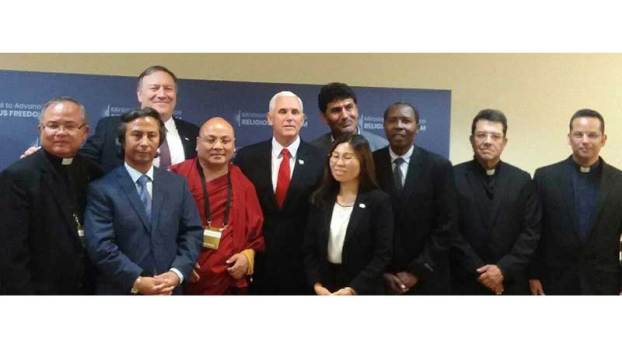 Pastor Hassan Abduraheem, third from right, recently spoke at a conference about religious freedom and met United States Secretary of State Mike Pompeo and Vice President Mike Pence, middle. Abduraheem and his family moved to the United States in October 2017 after he was imprisoned in Sudan for his religious beliefs.

Hassan Abduraheem, who currently lives with his family in the Heart of Virginia after experiencing imprisonment in Sudan for his religious beliefs, recently spoke at a conference entitled “Ministerial to Advance Religious Freedom” held by United States Secretary of State Mike Pompeo, and met Vice President Mike Pence and Pompeo.

“They asked me to share testimonies from my story,” Abduraheem said Sunday. “So I shared in the meetings.”

Abduraheem and Abdulmonem Abdumawla, who are from Sudan and are Christians, experienced imprisonment on charges of aiding an organization considered a security threat to the Sudanese government after pursuing humanitarian efforts.

Through a series of favorable events, Abdumawla and Abduraheem, and their families, currently reside in the Heart of Virginia, in Buckingham County just on the Cumberland County line.

Abduraheem said those who attended represented people who have been persecuted for their faith, whether Muslim Christian, Hindu or others. Abduraheem also shared the current situation in Sudan.

“Most of the people appreciate what they went through,” Abduraheem said about the response from people who attended the conference about people who shared their experiences with religious persecution.

Participants also attended a private meeting with Pence, and were given one minute to speak to him. Abduraheem said most participants received more than five minutes.

He said they talked to Pence about their stories, “what religious freedom means to us, and what we want from the vice president from the U.S. to do.”

Abduraheem will later be traveling to Oklahoma to appear at a conference held by The Voice of the Martyrs.

Abdulmawla said communication between he, Abduraheem and U.S. officials, “is going to send a strong message to our country, and that is very useful for us.”

When asked whether Abduraheem and Abdumawla would ever return to Sudan, they said the decision would be difficult, particularly as the government is aware they moved to the United States.

Abduraheem said he, Abdumawla and his family have lived in the United States for nearly 10 months, first moving in October after avocation from Congressman Tom Garrett, who serves on the Africa, Global Health, Global Human Rights and International Organizations foreign affairs subcommittee.

Abduraheem and Abdumawla currently work at Paris Ceramics in Farmville.

While at their home Sunday afternoon, friend Judy Heinold was working with Abduraheem’s family and children in enrolling in school in the fall.

“This is truly a community effort,” Heinold said, who said they have also received donations for people from others states. “It just shows you the goodness of people.”

Abdumawla said being involved in the community as friends has been critically important for he and Abduraheem.

“There’s a community here, ” Abdumawla said, describing the mulitiple opportunities for he, Abduraheem and his family to visit neighbors and for neighbors to visit them. “We’ve become part of this community now. … We never felt isolated.”

He said while they are still coming to terms with leaving family and friends in Sudan, Abdulmawla said encountering a new family in the area has been a good experience.

Bid not accepted for property

The bidding price of a 73-acre property on the Prince Edward County and Town of Farmville line, off South Main... read more