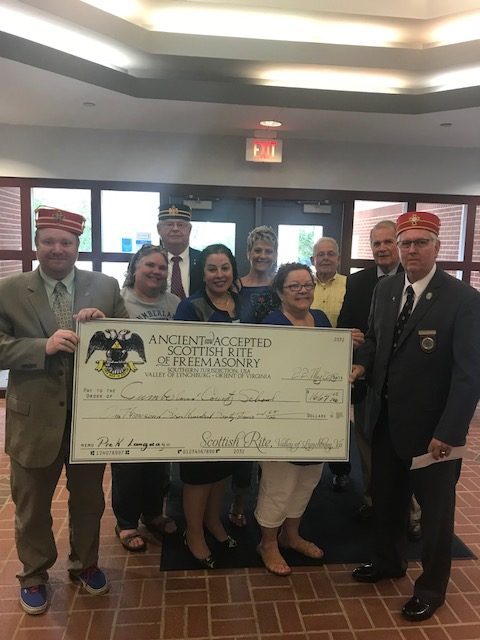 A gift of literacy to Cumberland Elementary

It’s not often that someone comes along and says, “We would like to support literacy in pre-kindergarten and we would like to give your school a monetary donation.” Actually, it’s the first time such a donation has been made during Principal Virginia Silveira Gills’ tenure at Cumberland Elementary School.

“I think I was in disbelief,” Principal Gills shared. “There were no strings attached, other than using the money for early literacy, of course.”

It all started with a call from Jim Charleston and the Scottish Rite. Charleston is a member of Valley of Lynchburg Scottish Rite as well as a resident of Cumberland County. For many years, the members of this organization have worked to give back to their communities, which span from Lynchburg City to now Cumberland County. They have provided funding for early literacy projects that include Project Talk in Lynchburg, Take-home Kits and more.

The team collaborated and identified a need for sensory tubs and alphabet enhancement centers.

According to Lead Prekindergarten Teacher, Juanita Adams, “We are so excited to use the new sensory tubs and other learning tools. Our students will love the extra opportunities that have been provided for them.” In the fall, Principal Gills attended a meeting in Lynchburg, where schools shared how they used the additional funds and how it helped improve student achievement.

“I was intrigued listening to the variety of ways that schools were using these donations. Mostly, I was moved by the impact that this one group was making on early literacy in and around Lynchburg, and grateful that this support would now impact Cumberland Elementary School.” Kathy McCutcheon, a pre-kindergarten teacher said, “Building children’s curiosity and love of learning through these wonderful activities will make for a fantastic year ahead.”

The Venerable Master of the Lynchburg Scottish Rite, James Bowyer, shared, “This is a way the Lodge can give back to each of the communities represented in our lodge and to our children who are the future. The Lodge hopes to have a long relationship with Cumberland County Schools.”