Danyelle Henderson has never shied away from a challenge, no matter how big. 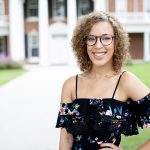 When she graduates and steps in front of her own classroom, she’ll be looking for another challenge: a job in a struggling school district, teaching students whose experiences mirror her own.

The child of a single mother who worked long hours to make ends meet. The first person in her family to go to college. A student who’s had to hold down multiple jobs to pay her tuition.

She’s come to understand that education is worth the sacrifice and that—as was the case for her—teachers often inspire their students to reach beyond themselves and set goals that seem unattainable.

In recognition of her dedication to education and its ability to help people rise above their beginnings, Henderson has been awarded one of Longwood’s highest honors for students: the 2018 Moton Legacy Scholarship.

The scholarship is awarded annually to a Longwood student with great promise for a life and career of citizen leadership, advancing in a contemporary context the ideals espoused by those who fought for equal opportunity in Longwood’s home communities of Farmville and Prince Edward during the civil rights era. It covers full tuition for one year.

“Danyelle is one of the hardest-working students I’ve encountered,” said Dr. David Coles, professor of history, who nominated Henderson for the scholarship. “She not only inspires me, but also her fellow classmates, with her commitment to and enthusiasm for learning. When she sets her sights on a goal, she does whatever it takes to attain it, and she will make for a wonderful teacher when she graduates this spring.”

Henderson’s journey to a college degree has been difficult, to say the least. A first-generation student who grew up in a single-parent home, she has often had to rely on herself to achieve her goals. Falling back on a work ethic imparted to her by her mother, she has worked multiple jobs while maintaining a top-notch GPA during her first three years. She is also a member of the Cormier Honors College, in Phi Alpha Theta and Pi Sigma Alpha honors societies, and has earned several academic merit-based scholarships for her classroom achievements.

“My mother worked several jobs to make ends meet and always pushed me to work at my education—she knew it was important,” she said. “It was my teachers, though, who taught me that school could be really enjoyable. All of them changed my life, and, if it weren’t for them, I probably wouldn’t be on this path. I want to be that for future generations of students.”

That work ethic is a lesson well learned. Henderson, a history major with a concentration in secondary education, has earned a 3.86 GPA while working as a student assistant in the history department and a tutor for athletic teams, all while delivering pizza for a local chain.

“With all those commitments, it’s sometimes hard to find time to hang out with my friends and do normal college-student things, but it’s worth it,” she said. “I just have to be very organized and prioritize the things that are important.”

One of those priorities: an opportunity to study abroad in France with Dr. Heather Edwards for three weeks this summer. The senior-level class focused on the French approach to the environment, health care and a range of other social issues—and the final assignment was to propose a social action project to be implemented back at home. It was the kind of class right up Henderson’s alley. But it was only by holding down three jobs while juggling five classes that Henderson could make it happen.

She was, unsurprisingly, working on that final project—in which she proposed a no-bag policy at her local grocery store, outlining the environmental and financial effects of her idea—when she received the call letting her know she had been awarded the Moton Legacy Scholarship.

“I was speechless,” she said. “Then I got pretty emotional. For me it really was one of those moments when all the hard work and sacrifices I’ve made to be here paid off. I told my mother that I won this scholarship and I apparently have made a big impact, and she was just so proud of me. She knows how hard I’ve worked to get this far and how much she’s been a part of that.”

Henderson first visited the Moton Museum with a freshman class. Like many students, the powerful story of Barbara Johns and her classmates was new, but the lessons still relevant.

“I was shocked, but not too shocked,” she said. “Given my experience as a biracial person, it’s hard to surprise me with stories of injustice. But I was and am certainly in awe of the courage of those young students who stood against that injustice and changed the world. I hope to inspire the same kind of attitude in my own students when I’m in the classroom.”

Those lessons, like the ones she learned from her mother—about courage and hard work and dreaming big—will shape the way she teaches her own students next fall in her own classroom.

“There are plenty of other people who face a similar uphill climb to mine—going to college and trying to get as many scholarships as possible to help pay for it,” she said. “My personal experience has shaped the way I view things. It’s made me very accepting of people’s circumstances, very open-minded. That’s why I want to work in Richmond, because that’s a place where I could make a difference.”