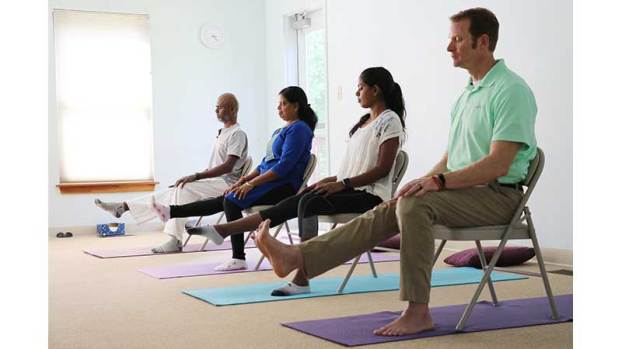 Yogaville recently revived an old event designed to meet people in the area and let them know what the Yogaville community has to offer them. This event was the Yogaville Open House and Community Tea, which took place on the afternoon of May 20.

Swami Vidyananda, an instructor in Yogaville, estimated the first community tea was held in 1982.

Having been a part of Yogaville since 1983, Vidyananda explained the purpose of the open house and community tea as being a way to give people a better understanding of the place.

“We’re out here, we’re all doing yoga, we’re vegetarian, we don’t smoke, we don’t drink — we’re weirdos, right?” she said. “And so people get this idea like, ‘Who are these strange people?’ But basically, we have straight jobs, we all come from backgrounds similar to yours or anybody else. If people come here, see what we’re doing, look around, they get to know us, they’re much more comfortable. We’re here to serve.”

She said the community holds daily yoga classes and meditation and holds talks about different faiths.

“We’re involved in ecological action for the community, but we don’t proselytize,” she said. “We don’t try to get anybody to think the way we do. We’re open to anybody, but it was the point of our teacher, who’s now passed away, Swami Satchidananda, not to proselytize. Teach, yes, but only if people ask. If people come to us, great. But this (open house and community tea) is just to let people know we’re here. If you don’t know we’re here, we can’t be of service.”

The May 20 event showcased what Yogaville has to offer in a variety of ways. A room open to guests used different forms of media to convey details about the community.

“This room has videos of our property, projects we’re involved in, brochures, all kinds of stuff,” Vidyananda said.

Visitors were given the opportunity to benefit from a sampling of the yoga instruction offered in Yogaville.

This class was led by someone she had taught, Santoshi Young.

A guided tour of Yogaville was also offered to visitors.

“We have a thousand acres and a lot of buildings and things,” Vidyananda said. “There’s a lot going on here. This is the tip of the iceberg.”

Yogaville includes a training academy where yoga teachers from all over the world are given instruction.

A key feature of the tour was the impressive LOTUS building, designed by Sri Swami Satchidananda. LOTUS stands for Light Of Truth Universal Shrine.

Vidyananda also said someone was set to teach meditation during the community tea.

Tea and food were offered to visitors as Yogaville representatives met and greeted them.

Recalling the community tea events from the ’80s, Vidyananda said, “We used to have about 300 people who’d show up. When we’d been doing it for years in a row, it was packed, because people would come from Farmville, Charlottesville, even Richmond, all over Buckingham County, all over Albemarle County, all over Nelson County.”