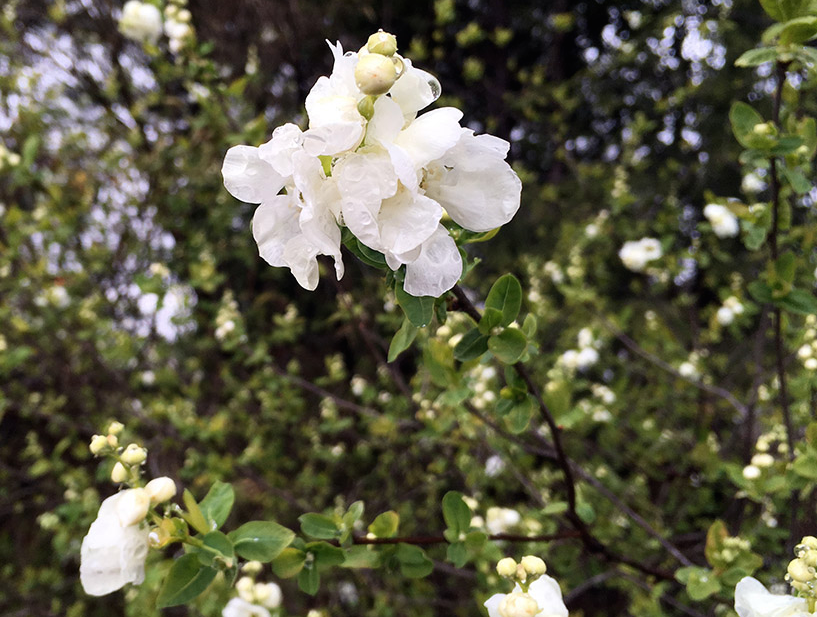 Pictured is a mock orange, an ornamental plant which had been at the estate of George Washington and Thomas Jefferson. (Photo by Cynthia Wood)

Many years ago, everyone’s grandma had several mock orange bushes in her garden. They were used to mark the boundary between yard and fields and also as specimen plants next to a porch where everyone could enjoy the fragrant blooms in spring. Way back then, it was customary for people to wear corsages to church on Mother’s Day – red flowers to honor living mothers and white ones for the deceased. Mock orange blooms were often used for hastily assembled tributes on Sunday morning.

The mock orange is a very old ornamental plant. It’s been used in European gardens since at least the 16th century. Here, both Thomas Jefferson and George Washington planted mock orange at their estates. Jefferson noted in his garden journal in the spring of 1807 that he had planted nine in the beds at the corners of his home. Washington sent directions to his gardeners to procure and plant mock oranges in circular beds that he had designed. Lady Jean Skipwith also planted mock oranges at Prestwould Plantation near Clarksville.

There’s lots to love about the mock orange (Philadelphus spp.). It’s tough, easy to grow, highly fragrant, and has masses of lovely white blooms. It’s even deer resistant. The variety grown in colonial Virginia was P. coronarius, a large variety with arching branches. It requires lots of space since it can grow to be 10 feet tall and nearly as wide, but if you need an interesting hedge or a large specimen plant, it’s perfect. P. lewisii was discovered by Meriweather Lewis when he was exploring the Louisiana Purchase. It’s a North American native and is also quite large. P. macrophyllus is a slow growing, small species that is only 3 to 4 feet tall at maturity. There is also an old cultivar, Manteau d’Hermine that is intensely fragrant and is 2 to 3 feet tall.

Plant mock orange in full sun in moist, slightly alkaline soil in an area where there is room for it to grow. After the plant is established, cut approximately a quarter of the canes to the ground every spring after the blooms are spent. This lets light into the center of the bush and encourages more blooms. Pruning also helps rejuvenate older bushes and helps keep their size in check.

Mock oranges aren’t just for historic gardens or restorations. They’re for everyone. It’s just a matter of selecting the right plant and location.

Bletilla: A Tough Orchid for the Home Garden