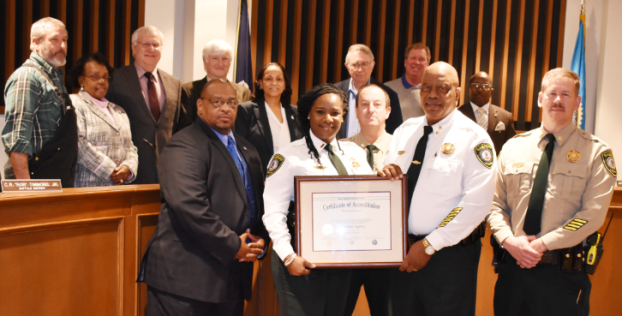 He noted that for four years the office has been accredited.

“We just went through accreditation and we passed with flying colors,” Reed said. “Truly it is an honor tonight to have the project manager, Derrick Mays here with us who is going to present us with the plaque tonight.”

Addressing the board, Reed said they supported his office and accreditation couldn’t have been done without the board.

Mays said the reaccreditation couldn’t have been accomplished without the community.

“This could not be accomplished without the assistance of the community. It’s not a sheriff’s office affair, it’s not a board of supervisors affair, it’s a Prince Edward County affair,” Mays said. “All the parts work together to get it done, and that’s the most important aspect. Not one person can get it done.”

He said everyone in the sheriff’s office put in the work to accomplish reaccreditation.

“If there was an issue they might scratch their head and roll their eyes, but I tell you what – at the end of the day, what needed to be done was done and it was done so professionally that a team that I sent in here still talks about it,” Mays said.

Fire and rescue give report