Bletilla: A Tough Orchid for the Home Garden

People tend to think of orchids as fragile, showy tropical plants that are too finicky for home gardeners. There certainly are plenty of tropical orchids, but they’re also found in temperate zones, semi-desert areas and even the tundra. There are more than 30,000 species of orchids. Almost 10 percent of all known plants in the world are orchids.

There are 20 native orchid species in Virginia. Some, such as the pink lady’s slipper, are quite showy, but most are rather plain, drab even. While most of our native orchids are best admired in their natural environment, there are some tough terrestrial orchids that are good choices for home gardeners to try. 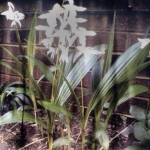 Bletilla bloom prolifically in late spring. These are planted with wild ginger.

Bletilla, or Chinese wood orchid, is perfect for beginners. It’s a temperate climate orchid native to China, Japan, Korea, and Vietnam. There are two varieties typically found in the nursery trade — Bletilla ochracea, which has yellow flowers, and B. striata, which has purplish rose flowers and is easier to grow. B. formesana is sometimes found for sale too, but it’s not cold hardy in our area. There are also numerous hybrids.

Bletilla orchids put up pleated green, sword-shaped leaves in spring and then bloom for about 10 weeks in late spring/early summer. The blooms resemble cattleyas, but are smaller and there are usually three to seven blooms per stem.

Plant bletilla in a woodland setting or in an area with full to dappled sun in the morning and shade in the afternoon, roughly the same amount of sun hostas prefer. Bletilla grows best in moist, well-drained soil that is high in organic matter. A pH of 6.2 to 6.5 is perfect.

Drainage is especially important to keep the pseudobulbs — thick fleshy stems that form under or above the ground — from rotting or being damaged by freeze- thaw conditions during winter.

After the plants have had a chance to settle in during their first year, they can be fertilized with manure during their growth phase, but many growers say that it’s not necessary. After the first killing frost in fall, cover bletilla with 2 to 4 inches of mulch and then remove most of it after the danger of frost has passed in spring.

• B. striata ‘Kuchibeni,’ which has white flowers tipped with pale lavender.

• B. striata ‘white pearl,’ which has creamy white blooms

If you like to experiment with new, different plants in the garden, this one is a good choice. It’s exotic looking; you’ll probably be the only person on your block to have it in your garden, and it’s relatively easy to grow. Let’s all plant one and compare notes at the end of the summer to see who got the most and the largest blooms. Competition in the garden is a good thing.

CYNTHIA WOOD is a master gardener. Her email address is cynthia. crewe23930@gmail.com.

Allium ‘Millenium’: 2018 Perennial of the Year