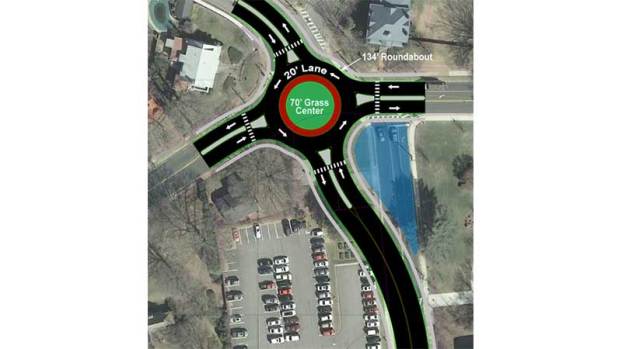 Engineering firm McCormick Taylor is recommending a 134-foot roundabout be constructed at the intersection of Griffin Boulevard and High and Oak streets. (Photo courtesy of Town of Farmville)

The Virginia Department of Transportation (VDOT) will provide analysis on the High and Oak streets and Griffin Boulevard intersection within the next 45-60 days in order to give the Town of Farmville an idea of traffic patterns and pedestrian traffic.

Whitus said he was contacted by Pope to schedule a meeting between Longwood, VDOT and town representatives to discuss funding possibilities.

“Discussions on the roundabout came to light when Longwood updated their Master Plan,” Spates said. “There have been minimal accidents at the intersection.”

He cited an engineer’s report done by McCormick Taylor, an engineering firm, that ranked three options.

Pope cited that Longwood does own some of the essential property in the area, and if the design and plan are good and safety is paramount, then Longwood is willing to contribute property.

“If you don’t have a crash issue now, you always run the risk that anything you do differently may pose an issue,” Harter said.

Harter said that statistics show that in the last six years, there have been eight crashes in the area. He cited that to receive Highway Safety Improvement money, there must be a safety problem. In looking at Pedestrian and Bike funds, Harter stated that if there is a high volume of pedestrian traffic, a roundabout may slow down the vehicular traffic going through a roundabout. He noted the heavy pedestrian traffic in the area.

Spates stated Milnwood Road is a Smart Scale project and had the highest number of accidents at the intersection of Milnwood and Main Street. He said until the state found money that the town did not use on bridge repairs, the town’s portion of the Milnwood and Main project was going to be $1.8 million.

“What problems are you trying to solve?” Harter asked.

Harter stated vehicle crashes are low and questioned if there is a problem with traffic flow in the area and pedestrians or bikes.

Pope cited that there are concerns about pedestrian safety because the light is so long, motorists “gun it through the intersection to beat the light.”

He said that he has heard concerns about a roundabout from older residents.