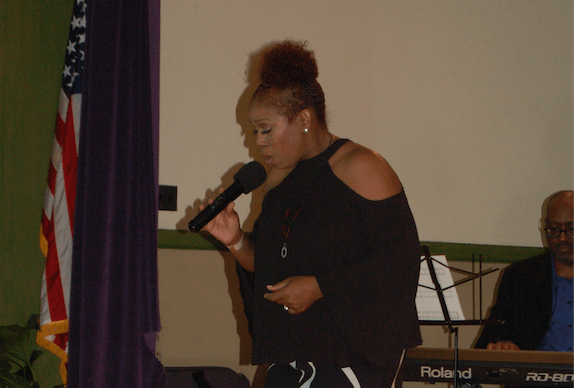 A packed auditorium heard the tunes of jazz legend Ella Fitzgerald come to life Saturday during the performance by Desiree Roots, who performed her tribute to Fitzgerald at the R.R. Moton Museum.

Roots played several of Fitzgerald’s hits, including “Cheek to Cheek,” “Someone to Watch Over Me” and an audience participation-laden rendition of “Route 66.” She also donned the low and raspy voice of Louis Armstrong during duets in which she switched between singing in Armstrong’s and Fitzgerald’s voices. The performance saw Frank Sinatra tribute artist Scott Wichmann take over the microphone for a few Sinatra hits, including “Moonlight in Vermont” and a duet between Wichmann and Roots on “Lady is a Tramp.”

According to Moton Museum Director of Education and Public Programs Cainan Townsend, approximately 125 people were in attendance. Townsend said the museum hosts a jazz performance for the community each year in February in honor of Black History Month. He said while attendance was about on par with previous years, the audience did seem more engaged this year.

“This year I think we kind of stepped it up a little in getting Desiree to come down with her group and do her tribute to Ella, which was fantastic,” Townsend said. “It seemed like the audience really enjoyed it. Definitely something that we try to do every February if we can, but if people seem more receptive, we may try to do it more than that.”

He said Roots was kind of local, which played into their decision.

“I saw her in ‘Dreamgirls,’” Townsend said. “She was actually in the Virginia Repertory Theatre production of ‘Dreamgirls.’ She played Effie White, so of course she had that big belting number, ‘You’re Gonna Love Me.’ (I said), ‘She’s really talented; we need to get her down (here).’”

He said things aligned, and the museum was “really fortunate to be able to have her come down.”

A dinner set for March 16 at Fuqua School will raise funds to preserve living spaces for waterfowl and other... read more