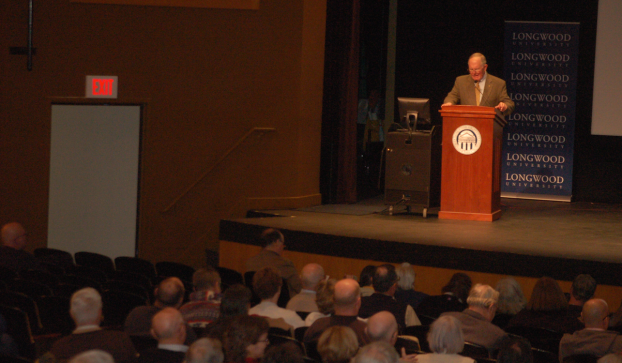 The 19th Annual Civil War Symposium was held Saturday in Jarman Hall on the Longwood University campus. The symposium, which was co-sponsored between Longwood and Appomattox Court House National Historical Park, explored topics such as Recollections of Appomattox, command and character in the civil war, Robert E. Lee’s generalship, women in the war and sex and the Civil War.

Speakers included Ralph Peters, author, journalist and Fox News strategic analyst, Edwin C. Bearss, recipient of the Congressional Gold Medal for his contributions to preserving American Civil War history and is 94 years old and Judith Giesberg, professor and director of graduate studies at Villanova University in Pennsylvania, according to a release from the University.

Giesburg said pornography brought men together in Civil War camps and added to the camaraderie of the camps.

“The anti-pornography measures passed late in the Civil War and its aftermath bequeathed an American legacy of post war attempts to shore up family and domesticity by attacking sexual practice,” Giesburg said. “Particularly women’s. In our textbooks our historians… often want to label this as a backlash, an attack on women who violated the norms of femininity. But I’m not sure that term actually captures how much the war can unsettle what we actually think about manhood not femininity for instance and how in bringing men together, war reveals how much manhood is variable and always contested.”

Gallahger spoke on Robert E. Lee’s Generalship: Politics, Public Morale and Confederate Prospects for Victory. His lecture assessed critiques of Lee as a parochial Virginian who failed to see the larger strategic picture, waged too many costly battles, never came to terms with the impact of recent military technology and might have shortened, rather than lengthened the life of the Confederacy, according to a press release.

His lecture explored various styles of leadership on the battlefield and in high command, with special attention to the interactions of character, personal background, generational issues and talent.

Edwin C. Bearss spoke on reflections that delve into some historical aspects of Appomattox, as well as personal reflections on attending the 100th, 125th and 150th anniversary events.