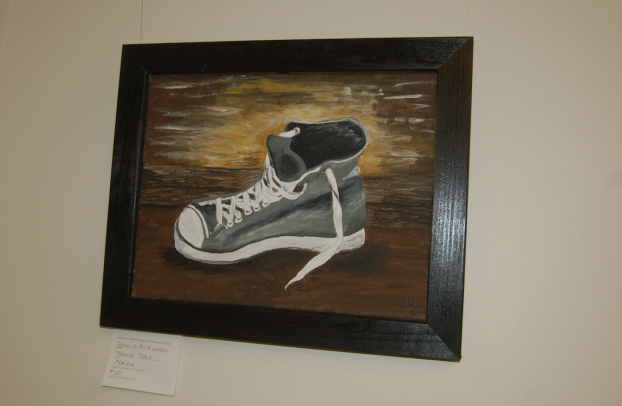 Pictured is “Track Star,” a piece by Phyllis McKinney whose work is now being shown in the Riverside Cafe at 522 N. Main St. (Photo by Morgan White.)

According to a press release, as a child McKinney always wanted to be an artist.

“Her elementary school teachers often asked her to draw pictures for boards or displays, and she loved it,” officials said in the release. “She received an art education degree at Hampton University and an early childhood master’s degree from the University of South Carolina.” 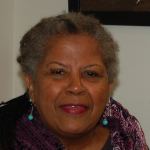 The release cited that Peca has been an artist all of her life, although sometimes her art has had to take a back seat to life.

“She has tried many forms of media, but her true love is oils. She started out painting figurative and still life pieces, and she graduated to landscape painting,” officials said in the release. “The observation of light, texture, and mood is what she strives for in her artwork.”

According to the release, Peca has studied under some well-known artists from the Chicago area such as Sharon Roman, a landscape portrait painter; Charles Vickery, a marina and portraits painter; and Michael McNicholas, an oil and pastel portrait and still life painter.

“(Peca)has taken classes at local colleges and one of the oldest studios in the country in Chicago, Pallets and Chisel,” officials said in the release. “She has studied still life and figurative works at the school of representational art in Chicago. Recently, she has been taking classes at Longwood University, and she dabbles in photography.”

The release cited that Williams has enjoyed drawing and other artistic endeavors since she was a small child and has been painting in oils since 1998.

“Having completed the Teacher Training Programs at the Bob Ross Studios, where she studied under International Instructors, she is a Bob Ross Certified 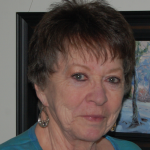 Instructor,” officials said in the release. “She teaches landscapes, seascapes, florals and wildlife in her Farmville Studio.”

Hummel to be featured in Easter concerts

By Marge Swayne Richmond organist Jeffrey Hummel is a musician who appreciates both the past and present. Sitting at the... read more