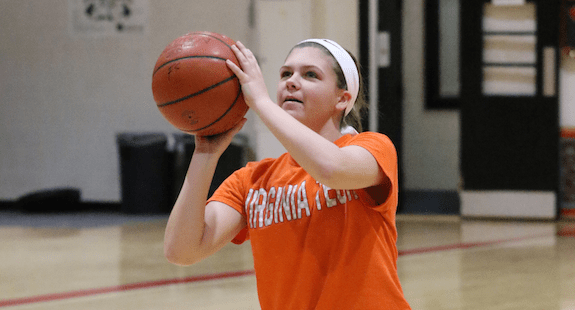 Fuqua School sophomore shooting guard Abbie Schmidt is a three-sport athlete whose upbeat personality has made her an asset to every team she has been on (photo by Titus Mohler).

Abbie Schmidt brings qualities to every athletic team she has been on that have made her a valuable teammate.

Benefiting from her impact have been Fuqua School’s softball, girls basketball and volleyball programs.

Now in her sophomore year, she presently serves as the starting shooting guard for the varsity girls basketball team.

“I love her to death,” Ford said. “She’s got a great attitude. She’s a hard worker. Came in, got some really big hits for us in softball season last year, and she had a couple real good games in basketball this year. She’s a good athlete.”

She said softball is her favorite sport.

“I guess since I play travel (ball), I get to meet more people with that sport, so it’s kind of interesting to see others play that sport too,” she said.

She has demonstrated impressive versatility in both softball and basketball.

In softball, “I usually play first or second, but I can play anywhere,” she said.

He noted she is one of the team’s leading scorers and top rebounders.

Schmidt’s personality helps make her a good teammate and a steady presence on the diamond or the court.

“My personality, I think I’m pretty nice and kind of soft-spoken,” she said. “… I feel like it helps me mesh better with the players, because we all kind of get along better when we’re soft-spoken.”

Ford said, “I’ve never seen her in a bad mood — always upbeat. I definitely think that helps her as an athlete. Just a pleasure to coach.”

When she has time away from school and athletics, she said, “I like to hang out with family and friends and go to the lake.”