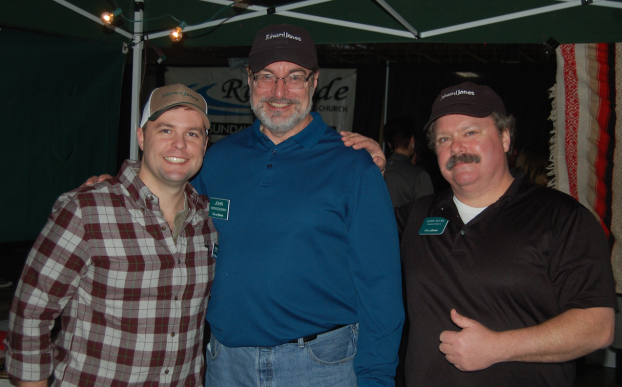 Pictured are, from left, Jay Whited, John Horoszewski and Kerby Moore, who take a break from serving chili at the Taste of Farmville event to pose for the camera.

Residents enjoy a Taste of Farmville

More than 600 people showed up to support the Farmville Rotary Club at the 14th annual Taste of Farmville event on Thursday which was held at the STEPS Inc. building located at 225 Industrial Park Road in Farmville.

“It just keeps getting better every year,” Debbie Savage said of the event she co-chaired.

She said the event originally started off as a chili cook-off at Fuqua School and quickly outgrew that.

She said it has grown each year, some years more than others.

She said this year’s attendance was about the same as last year.

“Not in more people necessarily but we (had) different types of vendors, we grew in the quality of the types of vendors we had,” Savage said. “We had some new ones that were kind of getting their feet wet at trying it out, and they did, and they had a good time, so hopefully they’ll come back again.”

According to Savage, The Woodland and Centra Southside Community Hospital both sponsored at the $2,000 level. Edward Jones Financial Advisor Kerby Moore and Citizen’s Bank and Trust donated $250. Benjamin Johnson CPA, Elder & Watkins PC, Real Living Cornerstone and Benchmark Bank all gave $100. She said overall there were about $4,900 in sponsorships.

“It just keeps getting better every year,” Savage said regarding the event.

She said next year the main change will be the venue.

“They’re going to start renovations this year,” Savage said. “Likely it won’t be ready in time, and we’re not sure how much space we’ll have, so we’re looking at other venues.”

Dr. A.D. Carson, assistant professor of Hip Hop and the Global South at the University of Virginia (U.Va.), spoke about... read more