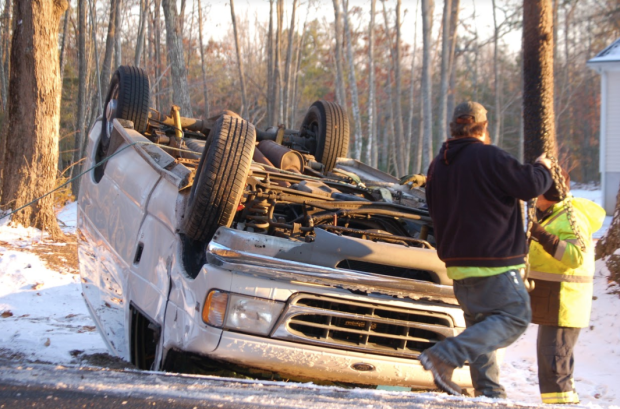 A white Ford van overturned Thursday afternoon on Abilene Road. A Prince Edward County Sheriff's Office sergeant cited that the road conditions, due to snow and ice, had contributed to the accident. (Photo by Emily Hollingsworth)

No injuries in vehicle overturn

A vehicle overturned in the 2600 block of Abilene Road on Thursday afternoon due, in part, to poor road conditions following the snowfall, but it resulted in no injuries, according to Prince Edward County Sheriff’s Office Sgt. Andy Cary.

Darlington Heights Fire Chief Dallas Tinsley said an ambulance was called but was turned away after the driver reportedly left the vehicle without injuries.

Tinsley said the department received the call at 3:52 p.m.

Cary said the road conditions due to the snowfall had contributed to the accident.

“(The vehicle) moved over to give another car room, slipped,” Tinsley said. “Not hard to do on these kind of days.”

Mar Towing, based in Keysville, worked to flip the vehicle and tow it from the site of the accident.

The driver of the white Ford E350, on scene, declined to comment.

Snow in the Heart of Virginia