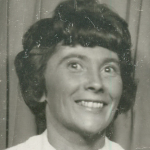 Her favorite things was decorating for each holiday and going to the Mountains and the beach. She was very crafty and was always willing to help anyone in need.

She worked several jobs but her favorite was welding at the Newport News Shipyard. She attended Antioch Methodist Church.

She is survived by her husband John T. Roark, a daughter Debbie A. Jarrett of Farmville 2 sons; Noah Ray Bates of Farmville, Michael I. Bates (Linda) of Farmville, 9 grandchildren and 13 great grandchildren, a sister-in-law Kathy Kelsey(Bill)of N.C. and a brother-in-law Bill DeVault of N.C.

She was preceded in death by her brother Noah Barr, a sister Juanita Beckhamir, and a sister-in-law Betty DeVault.

A memorial service will be held on Wednesday, Jan. 3, 2017 at 7 p.m. in the chapel of Puckett Funeral Home. Family will receive friends 1 hour prior to the service starting at 6 p.m. in the funeral home.