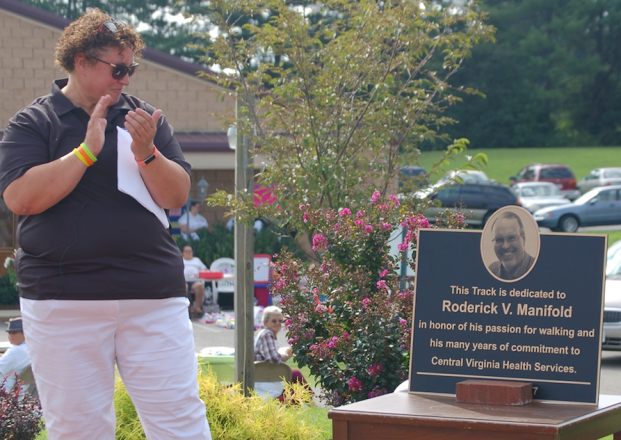 ‘A testament to him’

Central Virginia Health Services (CVHS) has had a difficult year.

Following the loss of former Executive Director Roderick Manifold — who died in a car accident in January 2017 along with his wife, Demetria, and mother-in-law, Marion J. Brewer — Paula Tomko, who was recently appointed to executive director after serving as interim executive director after his death, has had to lead advocacy efforts after Congress failed to recertify funds for community health centers throughout the U.S. at the end of September.

“As an organization I’m actually very proud of how well we have moved forward and transitioned. That, in some ways, is a testament to him as well, that he surrounded himself with a very competent and trustworthy team,” Tomko said regarding Manifold. “So the management team was able to step in and keep going to move us forward, especially in light of this challenging year where back in September our funding for community health centers ran out along with (Children’s Health Insurance Program).”

She said the organization is still awaiting funding news because they haven’t been reauthorized.

“We’ve had to do so much more advocacy to increase our funding,” Tomko said. “… It’s 70 percent of our funds that are at risk right now, so it has really been a big job for us to advocate, and that was one of (Manifold’s) primary roles.”

She said that’s something the organization has really had to step up and take care of.

CVHS is the parent organization for 16 separate health centers across Central Virginia.

Tomko said before his death, Manifold had visited each of the sites to hold town hall meetings.

“Because he did that, he set us off on a good pace for what we were going to have to do for advocacy, but we really had to carry the ball,” Tomko said. “A lot of it has been done in his honor, and it has motivated a lot of people because they realize the impact he has had on us, and they’re recommitted to carrying on in his honor because not just of what he’s done for the community health center movement, not just with our company but across the state and federally.”

“We see anyone who comes in,” Tomko said. “We participate in all insurances.”

She said the services are given money from the federal government through the U.S. Health Resources and Service Administration.

“So you can be insured but still fall in that grid and be able to get help with your deductibles, your copay, your coinsurance,” Tomko said. “We offer medical, behavioral health and pharmacy services to a lot of our sites.”

CVHS is a nonprofit. Tomko cited that there are 10,000 different community health centers across the country.

“We all operate under the same guidelines, so we’re really the largest source of care throughout the United States,” Tomko said.

According to Tomko, health centers have been around for 50 years. She said Head Start and community health centers were part of the War on Poverty back with President Lyndon Johnson.

“We’re the only two programs still in existence, and it has always had bipartisan support, so this is the first year since the ’80s that we’ve seen our funding not automatically approved,” Tomko said. “We’ve had some times where we’ve had some cuts here and there or because of budget issues, but under most cases on a bipartisan level we get support and growth because, in a lot of ways, studies have shown we are the most efficient delivery of health care in the U.S. …”

She said that community health centers are under the same discretionary funding that the Children’s Health Insurance Program (CHIP) was a part of.

“We went over the fiscal cliff on Sept. 30 when they didn’t renew our funding and then just this week with the government shutdown,” Tomko said. “They reauthorized the CHIP funding for six years, but our funding has still not been renewed.”

She said a lot of health centers are having to cut resources and hours, while others have had to close.

“Without guaranteed funding it’s hard for them to sign their providers to contracts or sign leases or things like that,” Tomko said. “While (CVHS) has resources because we’ve been very good stewards — and we have to, as a health center, have reserves so we can cover ourselves in the case of an event like this government shutdown or problems with funding that we’re supposed to have several months worth of reserves to handle that, and we’ve taken that very seriously — there are a lot of health centers that really struggle to get to that point.”

She said a lot of the organization’s advocacy efforts are focused on advocating for peers who are struggling and still meeting a need, “because there’s very few places that will take uninsured folks that is affordable.”

“There’s no place for these people to go if we don’t get our funding,” Tomko said. “So we’ve been spending a lot of time, weekly conversations with our federal legislators to make sure they understand the importance of what we do and how we need their force and for them to stick up for us.”

A Farmville man was sentenced to 30 years in jail, with 26 years of jail suspended, on seven charges of... read more