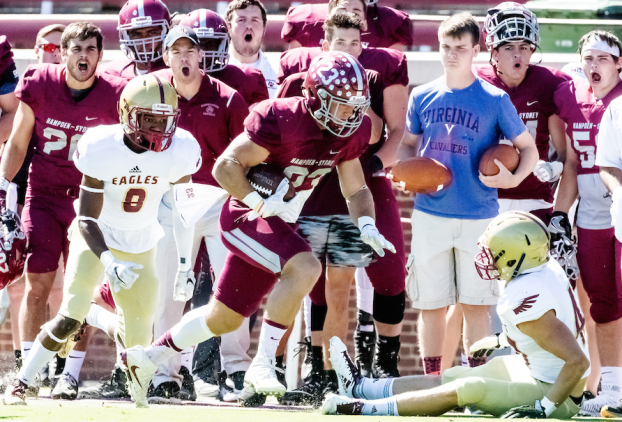 Shining as an all-purpose player

For a while, it looked like Carter Cunningham, the multi-sport star from Fuqua School, would not be back for another season of football at Hampden-Sydney College (H-SC) this year, but he opted to return for his last year of eligibility, and the Tigers were the significant beneficiaries of the decision.

Helping H-SC improve significantly over last season, Cunningham was free of major injuries this season, playing all 10 games. He was second on the team in receptions with 68, gaining 532 yards and two touchdowns.

The senior wide receiver was also used in the backfield, carrying the ball 33 times for 119 yards and two touchdowns.

The coach said he was

really happy for Cunningham, whom he has known for most of his life.

“I’ve got pictures of Carter as a ballboy at games 10 years ago,” Favret said.

Cunningham has grown up in Farmville, and Favret noted that he has a tight bond with Cunningham and his family.

“His mom runs Green Front Accessories, his dad played at Hampden-Sydney and has coached with us for the last five years,” Favret said.

Though Cunningham played football at Fuqua, his focus was on playing college baseball when he graduated.

He initially went to Christopher Newport University (CNU) and played baseball there during his freshman fall semester. But then he made a big change.

“I just got kind of burnt out from baseball,” he said. “I had been playing basically all year every year since I was about 12, and it just wasn’t as fun as it used to be to me, and I wasn’t really ready to give up sports yet, so I just decided, I played high school football, so I said I’d give it a shot. Coach Favret and Coach (Zeke) Traylor recruited me a little bit in football when I was at Fuqua, so I gave them a call and went into Coach Favret’s office the day I got back to Hampden-Sydney, and he welcomed me.”

Cunningham said he felt good about how he performed this past season.

“I battled a couple injuries the two previous years, so for me, … just getting through the season fully healthy was a big, I guess, accomplishment for me,” he said. “And then I probably played my best game at Hampden-Sydney against (Randolph-) Macon (College) in our last game. So, I felt really well. I didn’t play as well as I expected throughout the whole year, but it was just ups and downs here and there and overall, I think I had a pretty good season.”

Favret said he deployed a lot of people in the town to try to convince Cunningham to come back for his final year of eligibility.

“I’m really happy he did, and he just had a great year,” Favret said.

Cunningham now has his bachelor’s degree in economics.

“I could have graduated last spring, but I had that one extra year of eligibility for football, so I took it and then just took one class this semester and graduated just two weeks ago,” he said.

These are traits that should serve him well in the workforce as they did on the gridiron.

Dukes hold court for the holidays