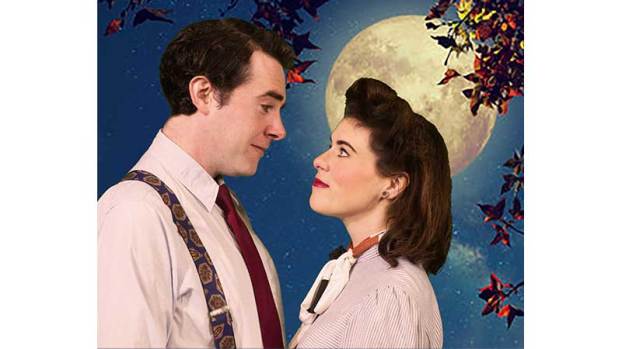 Chris Klinger, left, and Lacy Dunn play George and Mary Bailey for Illyria Theatre Company’s live radio rendition of “It’s a Wonderful Life.” Proceeds from the play will benefit organizations throughout the Heart of Virginia.

A timeless story and a unique art form will converge Dec. 7, 8 and 9 to entertain members of the community and raise funds for a number of good causes throughout the Heart of Virginia.

Illyria Theatre Company (ITC) will be performing a live radio rendition of the holiday film “It’s a Wonderful Life” at the Jarmon Auditorium at Longwood University.

Each performance will begin at 7 p.m. and will raise funds for the Southside Society for the Prevention of Cruelty to Animals (SPCA), United Way, Meals on Wheels, Heart of Virginia Christmas Mother and the Heart of Virginia Free Clinic.

Live radio is an art form that replicates the style of radio dramas popular in the 1940s, which use voices, music and sound effects to tell an engaging story.

Chris Klinger, president and co-founder of ITC, said putting the performance together has yielded both excitement and challenges.

“This is Illyria’s first live radio performance,” Klinger said. “It’s incredibly challenging to do a production of this nature, as there are many moving parts … It’s mastering the intricate details of live sound effect equipment that has turned out to be our favorite challenge to overcome.”

“We love doing theatre that brings challenges, and this is an art form that is rarely done anymore, so it has taken loads of research to find the right equipment for the right sounds, along with hours of rehearsal to perfect the exact sound,” Klinger said. “Being part of such a lively, active performance is a lot of energy to bring to each rehearsal.”

In addition to learning a new skill, Klinger said cast members have the additional challenges of playing dozens of different characters.

“The actors play about 50 parts between the whole cast,” Klinger said. “I play only George Bailey, while the rest of the cast covers several dozen characters.”

He said he hopes the performances, in addition to helping area organizations, will also give people in the community a fresh way to engage with the holiday season.

“This is a new theatre company, and we are trying to bring something special to Farmville for the Christmas season that becomes a holiday tradition,” Klinger said.

To reserve tickets or learn more about the play, visit www.illyriatheatrecompany.com/tickets or call (434) 298-4482.

A petition that began this summer to open a PetSmart store in town has received more than 1,200 signatures and... read more