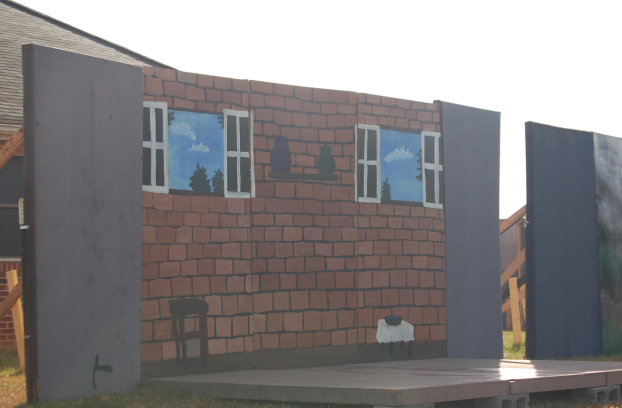 Pictured is a scene from the upcoming Live Nativity, set to take place at the Farmville Church of Christ on Dec. 15, 16 and 17 (photo by Emily Hollingsworth).

Farmville Church of Christ on 1401 Milnwood Road will hold a live nativity on Friday, Saturday and Sunday nights with painted sets and re-enactors bringing the nativity story to life.

An annual tradition in the Town of Farmville, the church’s Live Nativity will promise a drive to remember, Edgar Critzer, the nativity organizer, said.

Critzer, who was appointed to organize the nativity this year, said participants will drive through the church’s circular parking lot. While driving, participants can see the story of Jesus Christ’s birth acted out, scene by scene.

Critzer estimates that an average of 5,000 people have driven by the live nativity over the three nights the event takes place.

The magic in creating the scenes take work. Critzer estimates that between 35-50 people in the congregation re-enact the live nativity. Volunteers paint and build the sets.

“It’s as much for the church as the community,” Critzer said about the unifying aspect of working together with members of the church. “It helps us build as a body … brings us together as a church.”

Being at the Live Nativity on the nights they take place, Critzer said, “It’s hard to put into words.”

His favorite part of the event is seeing the faces of kids light up as they and their families drive through the Nativity scene.

“Little kids who see the sheep, the storyline of each scene. (Seeing) the Christmas joy on each face. It’s beyond words,” Critzer said.

Alvin Thomas, who owns a farm in Buckingham County, provides the sheep and lambs that create additional wonder at the event.

He said two sets of twin lambs and a few trained halter-broken sheep are set to take part in the Nativity, where they will be in the Bethlehem village and in the manger.

“I provide the donkeys and the sheep and the lambs,” Thomas said. “And sit there and hold them and try to make them behave.”

He has a few funny stories of a few young lambs that wouldn’t stay with their mother, or were far too interested in the slow-moving vehicles that were crawling around the church building.

“We were concerned they wanted to run out and play with the cars,” Thomas said. “One year we had two lambs who were older, and they were running out there and trying to lick the hubcaps on the cars as the people drove around.”

Thomas said because the newest set of twins were born a few weeks ago, that they will want to stay closer to their mother sheep and won’t be quite as adventurous.

Critzer noted while preparing for the event has been time-consuming, that the final product will be well worth the effort.

Many people enjoy baking come the holiday season, and perhaps no dish is more synonymous with holiday baking than cookies.... read more