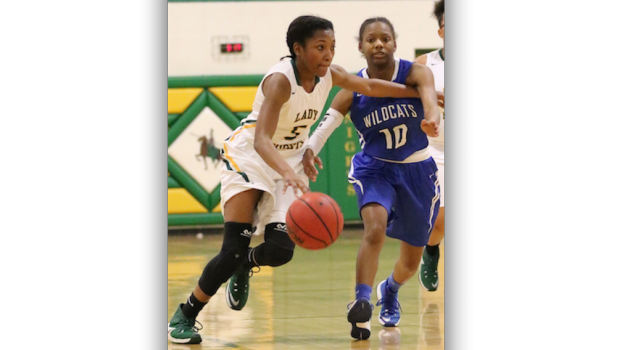 Lady Knights back for more

Buckingham County High School’s varsity girls basketball team put together a winning 2016- 17 season and the chief architects of that run have returned to continue their work.

“We only lost one senior, and it was her first time coming out,” said Kelly Chambers, who is entering her second season as head coach of the Lady Knights. “So we have the majority of our team returning.”

Last season, Buckingham finished with a 13-8 overall record. The Lady Knights earned the No. 4 seed in the Courthouse Conference 37 tournament and advanced as far as the semifinals before falling to host No. 1 Gretna High School.

The Virginia High School League’s latest realignment officially eliminated conferences and changed the structure of regions. Buckingham is aiming to be competitive in the James River District and Region 2C.

“I’d say that we’re all pretty excited about the start of the season,” Chambers said Monday. “We’re anxious to get going.”

The season began Tuesday for Buckingham when it visited Amelia County High School. The Lady Knights return to action Friday for their home opener, taking on Central Lunenburg High School at 7 p.m.

Pondering the upcoming season as a whole Monday, Chambers said, “We are looking to be able to duplicate our performance last year and then to also improve and grow from it. And I, personally, am proud of the girls with the growth that I’m seeing in practice. And we’re just trying to base our program on focusing on fundamental basketball.”

Junior guard Jayda Chambers is expected to lead the team. She is fresh off a sophomore campaign in which she averaged a team-high 11.7 points, 8.2 rebounds, 3.9 assists and 0.7 blocks per game, making the 2017 All-Conference 37 Second Team.

“She has been a strong competitor during her varsity years of play,” Coach Chambers said.

Jayda could alternate between the point guard and shooting guard positions.

“It just depends on what we need from her and what other girls are able to bring to the table as far as each individual team that we play,” the coach said.

In the course of looking at and evaluating the whole team, Coach Chambers has made note of some girls who could bring much to the table.

“I’ve had some girls who have had some ‘wow’ moments in practice,” she said, referring to sophomore forwards Amil Bolden and Kaya Amos. “Their court awareness and just their basketball maturity, I’m expecting some big contributions from them.”

Chambers also expects guard Shamari Wingfield to continue to play a big role on the team in her junior season.

“We rely on Shamari and her quickness and just to be able to contribute and do what we need as a team to get that win,” Chambers said.

Buckingham’s roster features six forwards and four guards, but no one is taller than 5 feet 7 inches. Amos, Bolden and freshman Morgan Randolph all stand at that maximum height.

Though they come equipped with experience, the Lady Knights still have some key obstacles they will need to overcome this year in order to achieve success.

“We have to overcome fatigue,” Chambers said. “We need to play all four quarters, and we just have to use it as our advantage because of our disadvantage in size.”

Illustrating the wide-ranging efforts of Buckingham’s athletics programs to benefit their participants, the coach and her staff are working to not only develop the girls on the team as players but also as people.

“We’ve been working on giving back to the community because the community has been supportive of us,” Chambers said. “So, we were able to feed a family this Thanksgiving. (We were) cleaning up some of the roads of Buckingham County. And this holiday Christmas season, we plan to do a tour and a gift drive to help the children and the elderly in the community. So, it’s just a whole big picture that we’re trying to focus on and that we’re excited about.”

Lancers enjoy 3-0 week on the hardwood

Longwood University’s men’s basketball team entered last week with an 0-5 record, and it emerged the afternoon of Dec. 2... read more