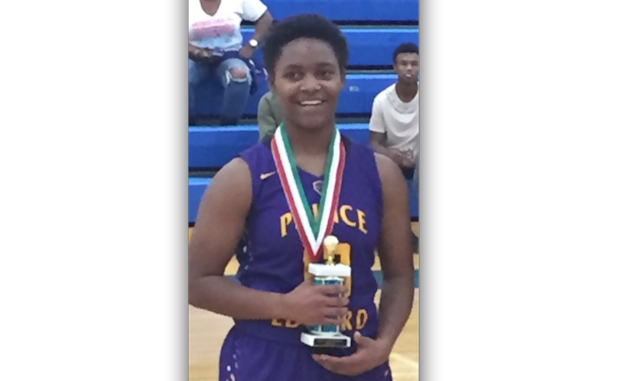 Reflecting on his team’s play in the tournament, Prince Edward Head Coach Carlton Redd said, “We did what we needed to do to win, but overall, I think we did pretty well. I was glad about the way that they held on that first night to beat Altavista. And the second night, we had a chance to get some younger players a chance to play, and they did well also.”

“That was a tough game,” Redd said. “That’s a good team. Honestly, we had a couple key baskets at the end, but overall, in that game, we made some uncharacteristic errors, and so did Altavista.”

He said that contest showed that his team would not give up and knew how to win at the end.

Against the Lady Dukes in the title game, Harris led Prince Edward with 16 points, while Lehman added 14 points and Scott had seven.

Though Prince Edward won by 22 points, it had defeated Cumberland by 41 on Dec. 5.

“I think it shows that they’re an improving team, that Coach (Omar) Liggins is doing a great job with them,” Redd said.

Coach Redd noted that his team features more experienced players at this point in time.

“That’s our advantage over them, I think,” he said.

Harris was named MVP of the tournament for the second straight year.

Redd admitted with a chuckle that it is sort of unfair, “but I expect that out of her. She’s a baller.”

Both Harris and Lehman were named to the all-tournament team.

“Madison making the all-tournament was big for our team also,” Redd said. “It shows that we have a little more depth.”

The Lady Eagles (5-2) visited Amelia County High School on Tuesday and will return to action Wednesday, Jan. 3, at home against Central Lunenburg High School, with a 7 p.m. tipoff.