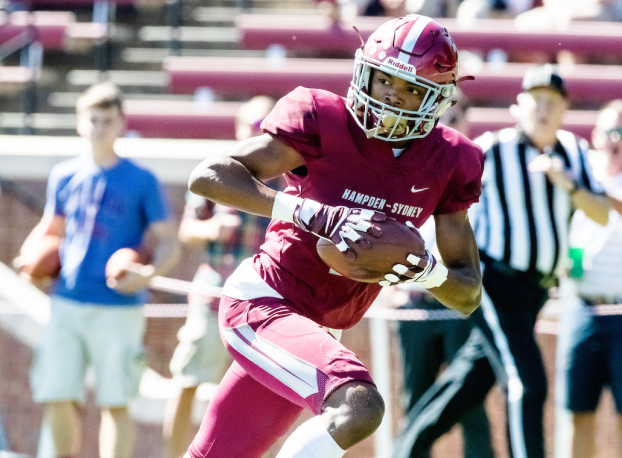 In a press release, the AFCA indicated that since 1972, Hampden-Sydney has been represented on the AFCA Division III Coaches’ All-America Team 11 times by 10 players, with Johnson, a former Buckingham County High School standout, included in that number.

“It’s a heck of an accomplishment, because there’s 240 teams and a lot of really good players, so I’m proud of him,” Tigers Head Coach Marty Favret said. “We’ve had some (All-American) receivers now, I believe he’s the fifth, and so he’s in some great company with some hall of fame-type guys that have played for us. And I called him Monday night when I heard the word, and he was very excited to hear about it.”

Johnson said that to be named an All-American “means a lot, being that it’s one of the highest honors. It’s a testament to all of the hard work that I put in during the course of the year, and the contributions that my teammates made to make it possible for me. I’m extremely grateful to have received this honor and to be in this position.”

Helping the Tigers improve from a 3-7 run last season to a 6-4 run this year, Johnson led all NCAA Division III receivers in the nation this year with his average of 11 receptions per game.

He noted that he was thinking about the All-American honor entering his final year on the gridiron at H-SC.

“It’s something that I definitely wanted to shoot for, along with some other things,” he said. “Coming into the season, I knew that I had to push myself harder than I ever had and expect more of myself. I prayed and prepared myself for everything that came (my) way, so it’s no surprise at all.”

In addition to the All-American honor, Johnson has been named a Second Team All-South Region player by d3football.com, he is a Lanier Award finalist, a First Team All-ODAC player and the ODAC Offensive Player of the Year.

Boosted by a combined 22 points from senior guards Autumn Childress and Micaela Ellis, along with eight fourth-quarter points from... read more