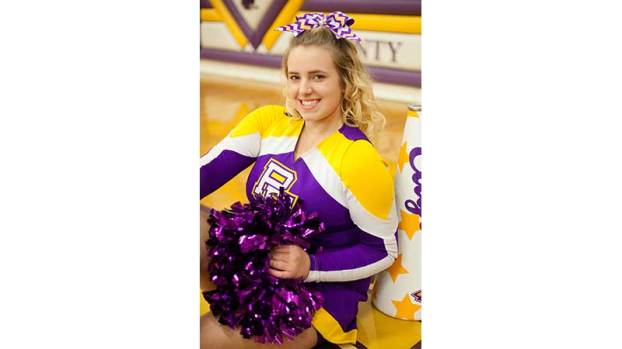 Brianna F. Giuriceo, 18, is remembered as “such a special young lady.” Here, she poses in her cheerleading uniform. (Photo by Carley Fetty)

A memorial service will be held Monday at 4 p.m. for Brianna F. Giuriceo, 18, who died Aug. 17 in a single-vehicle crash in Prince Edward County. According to Hampden District Supervisor Dr. Odessa Pride, the service will take place at the scene of the accident in the 3300 block of Abilene Road.

She said the constituents of the Hampden District wanted to do the service to honor her, “because she deserves this and so much more.”

Pride said those there will sing one or two Christmas carols, she’ll make a comment, “and then if someone else wants to say something they can.”

Giuriceo graduated this year from Prince Edward County High School (PECHS), where she was involved in band, cheerleading, forensics, German exchange, FBLA and the Tri-M Music Honor Society in addition to being an honor roll student and honor graduate, according to Debbie Rush, who is the school’s drama, forensics and debate coach.

According to Giuriceo’s obituary, she had been accepted to Mary Baldwin University with academic honors and was a supporter of dentistry for underprivileged children. The obituary also cited that Giuriceo had won Miss Autumn Dream, a beauty pageant, in 2016. She is the daughter of Gregory Lee Giuriceo Jr., of Farmville, and Shelia Smith Ransom, of Oklahoma, and was born in Farmville. She is survived by her parents, three grandparents, a sister and a brother as well as many aunts, uncles, cousins and friends.

DECEMBER 4 • Ernest Green II, 38, of Farmville, charged with fail to appear on misdemeanor charge and fail to... read more