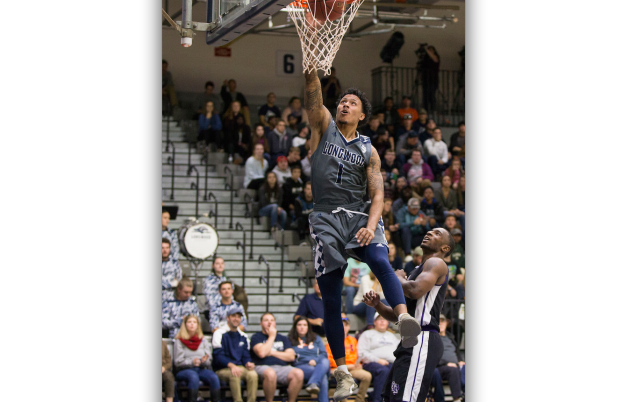 Finding the product of the system

There comes a time for every athlete when talent alone carries them only so far, when what once worked on the playground or in high school or even in last week’s game is effective no more.

It’s a wall that awaits all athletes, even those as talented as Isaiah Walton.

Longwood University’s leading scorer can do nearly anything on a basketball court. He can shoot. He can drive. He can dunk, he can defend and he can finish at the rim. He is a 6-foot-5-inch, 190-pound mismatch waiting to happen, blessed with athleticism that his defenders struggle to match and a smooth shooting stroke that he can uncoil in the blink of an eye.

That talent propelled Walton to a 1,000-point basketball career at Elyria High School and a successful stint at Iowa Western Community College, both of which eventually earned him a scholarship to Longwood.

However, all athletes have their wall, and three years into Walton’s college career, there was his — waiting for him to come crashing into it.

“Even though he scored a bunch of points, his turnovers, his body language, his signs of frustration kind of overshadowed that,” said Longwood Head Coach Jayson Gee.

Walton is the rare breed of player whose dominance comes in long, potentially game-changing bursts. His success begets more success, and when he finds his zone, he puts up points in a hurry.

However, the downside to Walton’s rogue tendencies last season came in the form of turnovers and poor shot selection. Too often did his explosive drives to the basket end with him trapped in the lane or in mid-air, encaged by a mass of defenders eager to swipe away the ball or alter his shot. That style of play became even more of a liability when that rash of injuries forced Walton, a natural scoring guard, to shoulder Longwood’s leading point guard duties for the second half of the season. As a result, he led the team with 95 assists but also racked up 130 turnovers.

As the season wore on, those frustrations compounded. What had once made Walton a high-level scorer was more often working against him than for him.

Walton had found his wall, and he would have to find a new way to get over it.

Fast forward to 2017-18, and Walton is largely the same player he was last year. He didn’t spend his offseason developing a new unstoppable crossover, nor did he level up his already impressive long-range shooting. He has always been in possession of those skills, as film from any game from the 2016-17 season will demonstrate.

Instead, Walton’s way around his own personal wall came in the form of submission to the team and a new approach to the game. What has transformed him from turnover-prone scorer to one of the Big South’s top guards in 2017-18 has not been an upgrade in ability but rather how and when he uses those abilities.

“In the past I’ve had some issues breaking off offense a lot and just trying to score my own,” Walton said. “Now I’m just trying to let the game come to me more. I’m actually scoring to use his body, the way he’s capable of using it. He’s a lefty, southpaw, so that always helps and being able to score in the paint and defend the paint.”

Bringing leadership to the team will be senior forward Darius Kyle, who stood out on the varsity football team as its starting quarterback this year.

“He understands what I want out of the team, and he likes to be the captain and the leader and carry out the things that I’m looking for,” Mosby said. “Plus, he can handle that low post position, which is the number four, he can handle it pretty good for his size.”

“He’s improved over the summer also with his shooting ability and his overall point guard skills — being able to see the whole floor and direct everybody where they need to be and just being a team leader,” Mosby said.

Mark Patterson Jr. joins the Dukes this year as a junior, having transferred recently from Prince Edward.

Returning to Cumberland via transfer is senior Ja’Quan Brown.

Junior Ziahir Berry joins the team after having had good opportunity to display his athleticism on the gridiron.

Defense will be key for the Dukes..

“That’s going to be definitely our identity this year,” Mosby said.